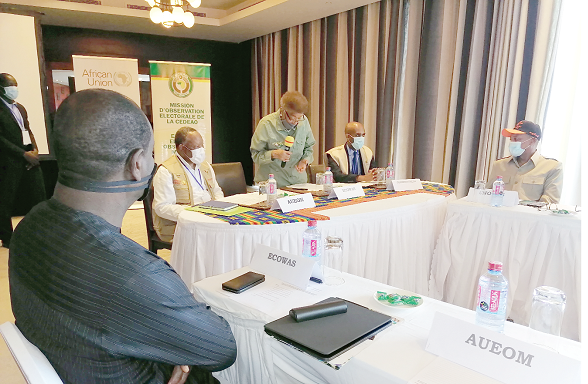 International observer missions for Ghana’s general election have hailed voters for their keen participation and commended the Electoral Commission (EC) for supervising the successful elections.

While the European Union Election Observation Mission (EU EOM) has said the elections were organised in an efficient and transparent manner, the ECOWAS Observer Mission said African countries needed to emulate Ghana’s example of conducting free, fair and transparent elections.

At separate media engagements in Accra to give their initial overview of the elections they monitored, the two missions emphasised that the exercise had taken place in a fair, transparent and peaceful manner.

At a post-election meeting of the Heads of International Election Observation Missions (IEOMs) to Ghana’s 2020 elections, the Head of the ECOWAS Observer Mission, Mrs Ellen Johnson-Sirleaf said: “It is pleasing to know that Ghana has lived up to its expectations in the conduct of elections in a free, fair and credible manner.”

Speaking at the meeting, which was for the sharing of key findings on Election Day, she noted that peaceful transfer of power in Ghana was a great opportunity for not just Ghana but the whole of Africa.

Mrs Johnson-Sirleaf, who is a former President of Liberia, therefore, called on African countries to emulate Ghana, which, according to her, was a model for Africa, to instill the much-needed confidence in the electoral systems in their various countries.

Also at the meeting was a United Nations (UN) delegation, led by the Special Representative of the Secretary General of the UN and Head of the UN Office for West Africa and the Sahel (UNOWAS).

Mrs Johnson-Sirleaf indicated that her mission had identified some challenges that needed to be addressed.

She said there was the potential for misinformation through the rapid circulation of fake information, especially on social media.

“It is important that we ensure that factual information is given,” she said.

Presenting the preliminary statement of the EU EOM at a press conference in Accra yesterday, its Chief Observer, Mr Javier Nart, said while Ghanaians voted freely, there were some isolated violent incidents, both on election day and during campaigns, but those incidents did not undermine the credibility of the polls.

“Voting was well conducted and political party agents were present at all polling stations, where the verification of voters was implemented. Counting was transparent in the presence of party agents, who signed the results and received copies, which is a critical transparency measure.

“Fears about violence and vigilantism, fortunately, did not materialise. There were some isolated incidents, even tragic ones,” he said.

The Chief Observer noted that on election day, the EU EOM in Ghana deployed 80 observers from 26 EU member states, including Norway and Switzerland, to observe the elections in all the 16 regions of the country.

He said the observers followed opening procedures, voting, closing and counting at all levels in the 345 polling stations and observed the collation of results at the constituency and regional levels.

He was happy that the EC had completed technical preparations for the elections in a timely manner and assessed the EC’s national, regional and district structures as “competent, well-resourced and transparent”.

Commenting on the role of the media, which he described as critical, Mr Nart observed that the media environment in Ghana was vibrant and diverse, but also polarised.

He expressed concern over the way the state-owned media favoured the ruling party and its presidential candidate through the extensive coverage of news and live broadcasts of the inauguration of projects by the President and government representatives, while the opposition got very minimal coverage.