Make your services available to all - Dr Adutwum challenges accountants 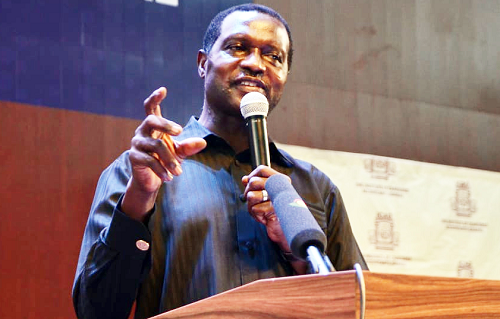 Dr Adutwum addressing the newly admitted members of the ICAG

The Minister of Education, Dr Yaw Osei Adutwum, has challenged accountants to make their services readily available to small-scale businesses in the country.

According to him, the time had come for accountants to break the status quo and solicit for the services of small businesses, including farmers, noting that the accounting profession permeated all aspect of society.

At the 37th graduation and admission ceremony of the Institute of Chartered Accountants, Ghana (ICAG), in Accra on Saturday, Dr Adutwum said if the services of accountants were not felt or consumed by the ordinary Ghanaian, then they were not doing enough.

“We should expand our scope and allow accountants to solicit for the services of small businesses such as farmers and market women.

“I do not know how you have approached your lives so far as you progress on the educational ladder, but I wish to urge and admonish you as new charted accountants to avoid petty compromises and get-rich-quick schemes,” he emphasised.

Dr Adutwum also encouraged the graduands not to give up too early since they would encounter obstacles as they pursued their accounting profession.

The second 2021 graduation ceremony was the 37th since the inception of the programme by the ICAG.

In all, 439 qualified accountants were inducted into the institute while 563 new members were duly admitted to join the institute after satisfying specific qualification criteria, including 19 Accounting Technician Scheme West Africa (ATSWA) graduands.

The purpose of the graduation was to formally admit new members into the fold of the institute’s existing membership. Some of the new members have qualified by successfully passing all three levels of the Chartered Accountants (CA) professional examinations while others have met the requirements through assessment of training they had received at equivalent professional accountancy bodies.

While acknowledging that there were infrastructural challenges, he was quick to add that the government had introduced innovative ways to quickly deal with the situation to be able to catch up with the rest of the world.

That, he said, informed the government’s decision to introduce the Double Track System and added that the system was a leapfrog strategy, which he said “countries such as Kenya and Uganda have started learning from us”.

The President of ICAG, Professor Williams Abayaawien Atuilik, congratulated the newly-admitted members and graduands, and challenged them to be ambassadors of the institute as they stepped out.

He added his voice to the call on accountants to be proactive and look for new ways to help small-scale businesses through their accounting works.