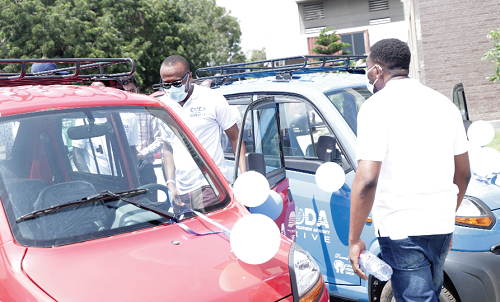 The move by the government to help commercial motorcycle riders, popularly known as Okada, to graduate from the risky and less safe venture to a safer means of transportation, finally came to light last Friday when the Coastal Development Authority (CODA) launched the Bajaj Qute vehicles under the 'Okada for Car' initiative.

The motorbikes will be valued and sold at the hinterlands where there is less traffic.

The launch also forms part of processes to phase out the commercial motorcycle business in the nation’s capital.

Drivers are expected to work for at least 20 working days, and expected to deposit GH¢ 41 each day within a month.

Road injuries are estimated to be the eighth leading cause of death globally. About 3,700 people across the world die every day due to road crashes.

Motorised two and three-wheelers comprise about 28 per cent of all global road deaths.

In addition, approximately 55,000 to 137,000 people suffer non-fatal injuries, with many suffering disabilities as a result of the severity of injuries suffered in road crashes.

The continent is the region with the highest death rate relative to the global rate and other world regions.

Road Traffic Regulations 2012 (Legislative Instrument [L.I] 2180) prohibits the use of motorcycles and three wheelers for commercial activities. The L.I states that “the licensing authority shall not register a motorcycle to carry a fare-paying passenger”.

However, there has been a blatant disregard for this regulation for many years, mainly due to challenges in enforcement and difficulty in distinguishing private from commercial use.

Speaking at the launch in Accra, the Chief Executive Officer (CEO) of the Coastal Development Authority, Mr Jerry Ahmed Shaibu, explained that the intervention was to improve the livelihoods of the riders and create employment by facilitating transportation for individuals and small businesses within the coastal development zone.

He added that the initiative was also to provide a platform for the riders to have an alternative lifestyle and alleviate poverty.

The CEO of CODA further noted that his outfit would collaborate with the Driver and Vehicle Licensing Authority (DVLA) to offer different training regimes for the drivers to acquire some knowledge on basic maintenance of the vehicles.

Mr Shaibu said his outfit’s dream was to see Okada riders enrich themselves through CODA Drive.

“I want every Okada driver to be a billionaire. So switching to CODA Drive is an advantage to start by being a millionaire.

“We want to assure you of your safety; we want to help you succeed so you can look after your children and family,” he added.

Also, the CEO revealed that his outfit was hoping to roll out 200 vehicles every quarter of the year.

For his part, the Public Relations Officer of the Motor Riders Association of Ghana, Mr Randolph Osei Buabeng, commended the government and CODA for the initiative.

With the rollout of ‘CODA Drive’, he said, Okada riders could now have an alternative livelihood that was not only safer but would improve their finances as well.

“It will help us alleviate poverty and ensure our safety. We believe it is a sustainable business and will reduce the hustling of Okada riders,” he said.

According to the PRO, members were satisfied with all the arrangements made by CODA on the acquisition of the cars and would take advantage of the opportunity to own a car.