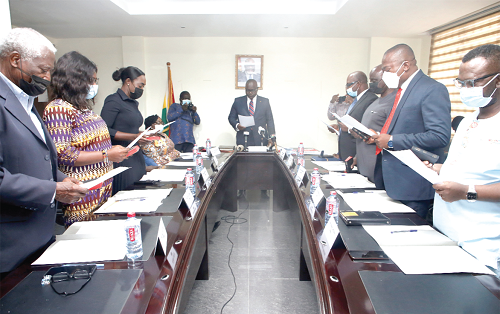 The Minister of Works and Housing, Mr Francis Asenso-Boakye, has entreated the reconstituted board of the Architectural and Engineering Services Limited (AESL) to look beyond public sector contracts to make the company more viable.

He said the board and management of the company could leverage on the wealth of expertise and experience of the company to break and gain grounds in the private sector and also stretch beyond the shores of the country.

He was inaugurating the seven-member board, chaired by the Managing Director of AESL, Prof. Kwame Asamoah, in Accra last Tuesday.

“This government has always said that the private sector is the engine of growth and so it has been creating the enabling environment for the private sector to thrive. That is why there is a lot of private actors in all sectors of the economy.

Mr Asenso-Boakye said since 2019 the company had seen some dramatic improvement achieving a number of feats including being able to pay its workers.

He said the company had also been able to regain some public contracts that they lost due to some challenges which he said was an indication that the company had a bright future with good management and board.

“I have always believed that leadership counted a lot and I believe that you have taken a cue from the right and quality leadership example exhibited by the President, Nana Addo Dankwa Akufo-Addo,” he said.

He charged the board to work hard to take the company to the next level to make it better than it is today.

Prof Asamoah expressed gratitude to the president for giving them the opportunity to serve the country and promised to build on the successes chalked to ensure a stronger and formidable organisation.

He mentioned some of the successes to include clearing the seven-month salary arrears.