Kumasi gears up for Asantehemaa’s funeral 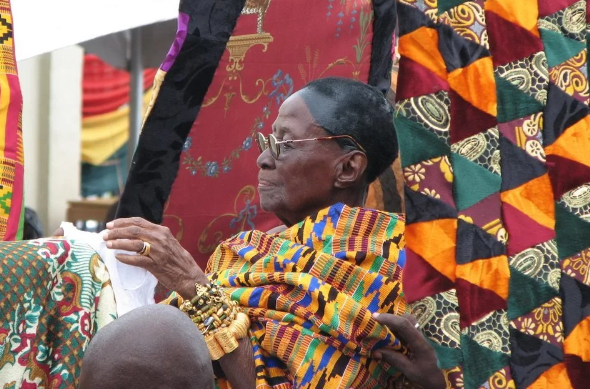 The Kumasi Metropolis is gearing itself up for the final funeral rites of the Asantehemaa, Nana Afia Kobi Serwaa Ampem II.

Almost all the monuments, roundabouts and ceremonial streets in the Garden City have been refurbished, while utility poles and trees on the main roads have been draped in red and black cloths, signifying that a big funeral is in the offing.

Large and colourful billboards of the late queenmother have also been erected at vantage points in the city, providing information about the funeral, which will start from December 1 to December 15, 2017.

Nana Serwaa Ampem, who is the biological mother of the current Asantehene, Otumfuo Osei Tutu II, and the Queenmother, Nana Ama Konadu, died on November 14, 2016, at the age of 111.

She reigned for 39 years and was buried at dawn in a full traditional ceremony at the Breman Royal Mausoleum (Ban mu) on January 20, 2017.

The sub-committee on Health and Sanitation of the Funeral Committee, in collaboration with the Kumasi Metropolitan Assembly (KMA), will today clean up the metropolis as part of preparations for the funeral.

The Aliu Mahama Foundation, a non-governmental organisation, organised a massive clean-up exercise on November 25, 2017, ahead of the funeral.

The Manhyia Palace, which will play host to hundreds of mourners, has been decorated for the event, while the adjoining football field-size grounds, on which almost all outdoor activities will take place, has been mowed.

Just like the burial ceremony, a meticulous programme has been outlined covering security, health and protocol, among others, to ensure the safety and security of all, as well as enable others to witness the rich Ashanti culture.

Among the activities outlined for the two-week event would be performances by traditional priests and priestesses. Otumfuo Osei Tutu II would also sit in state to distribute palm wine and receive messages of condolences, as well as donations from sympathisers. Other activities include fasting, and a thanksgiving service.

Meanwhile, there is a boost in economic activities, particularly in the sale of traditional cloths and sandals.