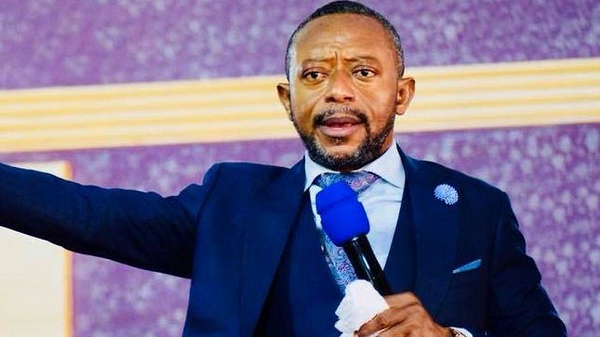 Police prosecutors have charged a radio presenter of the Despite Media Group for conniving with Rev. Isaac Owusu Bempah in the alleged threat to kill self-acclaimed fetish priestess-turned-evangelist, Patricia Oduro Koranteng, aka Nana Agradaa.

The police said Kwame Amoh, the journalist, interviewed Rev. Owusu Bempah, the General Overseer of the Glorious Word Power Ministry International, on the day of the said incident.

“The seventh accused person (Kwame Amoh), who is a radio presenter, also went to the scene to interview the first accused (Rev. Owusu Bempah) thereby instigating the other accused persons and others at large,” the prosecutor, Chief Inspector Denis Terkpetey, told the Accra Circuit Court yesterday.

Rev. Owusu Bempah is on trial for allegedly leading and instigating his church members to threaten to kill Nana Agradaa.

He has been charged with six others, including Amoh.

At their appearance in court yesterday, all the accused persons pleaded not guilty to various counts of conspiracy, abetment, offensive conduct conducive to the breach of peace and threat of death.

They appeared in court after the police prosecution amended the charge sheet.

Previously, it was Rev. Owusu Bempah, Ofori and Berchie who were standing trial over the alleged threat to kill Nana Agradaa.

This is the third time police prosecutors have amended the charge sheet, with the case travelling to three different circuit courts.

Aside from the alleged threat to kill Nana Agradaa, Rev. Owusu Bempah is also standing trial in a different circuit court for allegedly inciting his church members to beat up three policemen who went to the church to arrest persons who had threatened to kill Nana Agradaa.

Three other members of the church - Micheal Boateng, Frederick Ohene and Nathaniel Agyekum - are also facing the law for allegedly taking part in the beating of the policemen and destroying a police vehicle.

Following a bail application by their counsel, Mr Gary Nimako Marfo, the court, presided over by Ms Evelyn Asamoah, granted bail in the sum of GH¢100,000 with two sureties to each of the seven accused persons.

After securing bail for his client, counsel expressed displeasure about what he described as the checkered nature by which the prosecution was conducting the case.

This is the third time counsel had to seek bail for his client due to the amendments to the charge sheets by the prosecution.

Presenting the prosecution’s facts, Chief Inspector Terkpetey said on September 8, Rev. Owusu Bempah and 45 heavily built men went to Nana Agradaa’s house to attack her, with the men shouting: “We will kill you”.

He said Rev. Owusu Bempah instructed the men to bring Nana Agradaa out of the house and teach her a lesson.

The police, he said, rushed to the scene and prevented any potential bloodshed.

The prosecutor said on September 12, 2021, the police saw a viral video in which Ofori and two other members of the Glorious Word Power Ministry International were threatening to kill Nana Agradaa, for which reason they went to Dansoman and arrested Ofori, while other officers went to Rev. Owusu Bempah’s church to arrest the others.

“The first accused, on seeing the policemen, ordered his church members to beat and kill them.

He further ordered the church members to march to the Dansoman Police Station to free those arrested.

“The church set upon the policemen and beat them up, amid the firing of gunshots, disarmed the police of two service rifles and vandalised their car,” the prosecutor added.