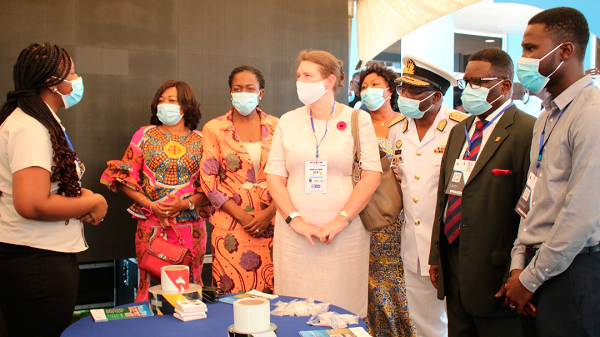 Ms Csaba (middle) with the dignitaries at one of the exhibition stands at the event. PICTURE: DELLA RUSSEL OCLOO

Maritime sector stakeholders are being urged to tap into the latest innovations and best practices in ensuring a robust maritime security regime which is key in achieving the objectives of a sustainable blue economy and overall economic growth.

According to the Canadian Ambassador to Ghana, Ms Kati Csaba, the Gulf of Guinea (GoG) remained an important trading hub within the West African sub-region since it was endowed with resources that offered potential for a thriving blue economy that could better the lives of all Ghanaians.

Speaking at the inaugural maritime conference and exhibition dubbed, “Blue Career and Business Expo on the theme: “Building a Robust Blue Economy, Leaving No One Behind”, in Accra last Tuesday, Ms Csaba stressed that maritime security remained important to the prosperity Ghana might wish to see within its economy.

The two-day conference, put together by a maritime transport non-for-profit organisation, The Gulf of Guinea Maritime Institute (GoGMI) in partnership with Women’s International Shipping and Trading Association (WISTA) was intended to create opportunities for young people to network with the maritime transport industry players to enable them to foster career development.

The event was attended by maritime transport industry players, the academia, members of some civil society organisations among others.

Beyond tackling maritime security, Ms Csaba underscored the need for an innovative and inclusion of the best minds working in the area of ocean science, border security, surveying, and the development of renewable energy and all other aspects of the maritime sector.

Women, she said, continued to be underrepresented in the sector, hence Canada’s commitment into supporting them to enter careers that are traditionally dominated by men, including defence, science, technology and engineering.

A Maritime Law Consultant, Dr Kofi Mbiah, who delivered the keynote address lamented that whereas Africa’s 38 coastal states had a total coastline, including islands covering 48,000 kilometres, as well as over 100 port facilities which handled containers and various forms of cargo, the continent held a meagre stake in the ocean-based economy.

African-owned ships, he noted, accounted for about 1.2 per cent of world shipping and about 0.9 per cent by gross tonnage.

“The ports on the continent handle only six per cent of worldwide water-borne cargo traffic and as well as three per cent of the worldwide container traffic,” he said.

Dr Mbiah regretted that Africa was the least maritime conscious continent of all the continents in terms of the ownership of vessels, volume of sea-borne trade, including the value of fish landings per capita.

Citing statistics with that of Denmark which he said was surrounded by sea and had more than 400 islands and a total coastline of over 7,000 kilometres, Dr Mbiah said almost 10 per cent of global trade presently were transported by ships under Danish control.

The Eastern African blue economy, for example, he stressed yielded an output of about 11 billion USD in 2017 mainly from the fisheries, marine and coastal tourism, however, same he said could not be said about the West African sub-region.

“We as a people must be interested in the over 1.5 trillion dollar ocean economy with the potential of providing over 40 million jobs by 2030,” he said.

The Special Rapporteur for Piracy and Maritime Security at the African Union, Ms Kathleen Quartey-Ayensu, in her remarks said the expectation of the AU was that each member state would take the necessary steps to develop a maritime policy in the next three years.

The Commandant of the Kofi Annan Peacekeeping Training Centre (KAIPTC), Major General Francis Ofori, in his remarks said the maritime sector remained a key contributor to the country’s economic growth.

The Executive Director of GoGMI, Dr Alberta Sagoe, in her welcome address said the event had became necessary to create the needed awareness of the opportunities in the sector that young people were missing out on and also exposed them to newer technologies within the sector.

Other speakers at the event were the Chief of Naval Staff, Rear Admiral Issah Adam Yakubu, as well as the Programme Officer in charge of Maritime Security and Safety at the ECOWAS Commission, Mr Tukur Mohammed.