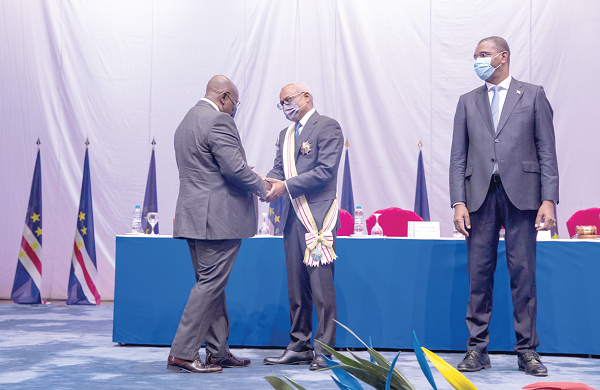 The President of Cape Verde, Dr Jose Maria Pereira Neves, was last Tuesday inaugurated at an impressive and well-attended ceremony at the spacious National Assembly located in the capital city, Praia.

The ceremony attracted a host of world leaders, including President Nana Addo Dankwa Akufo-Addo, who was present in his capacity as the Chairman of the Economic Community of West African States (ECOWAS).

The 61-year-old former Prime Minister, who ran on the ticket of the opposition African Party for the Independence of Cape Verde (PAICV), earned a first-round victory with 51.7 per cent of the votes in the election held on October 18, avoiding a run-off in the West African island nation tagged as a model of democracy in the sub-region.

Before a selected gathering, Dr Neves was sworn in as the fifth President of Cape Verde to begin his five-year term, which started yesterday.

Other Presidents and world leaders who attended the swearing in were the President of Portugal, Marcelo Rebelo de Sousa; Senegal's Macky Sall and Angola's Joao Lourenco, while Brazil was represented by its Vice-President, Antônio Hamilton Martins Mourão.

The US sent a high-level delegation, headed by its Labour Secretary, Marty Walsh, with the leaders of a number of international organisations and members of the Diplomatic Corps also in attendance.

Unlike in many West African countries where colour, pomp and ceremony heralded such events, there was no cultural display, nor were there decorations anywhere around town.

There were just about 100 soldiers dressed in green camouflage and holding AK 47 assault rifles, with just one of them blowing a bugle to welcome the world leaders to the ceremony.

All in all, the ceremony did not travel beyond two hours.

In the main hall that houses the 72-member Parliament, the President-elect was called in after all invited guests and dignitaries were seated.
President Neves was sworn in with his hands on the country’s constitution; and later he was decorated with a sash made in the national colours across his shoulders.

In his maiden speech, he expressed appreciation to all the leaders who had honoured the invitation to support him.

He also paid tribute to President Akufo-Addo in his role as the ECOWAS Chairman and representing the sub-region at the event.

Dr Neves said Cape Verde was in a crisis, as revealed and aggravated by the COVID-19 pandemic whose effects had been profound, particularly at the social, economic and emotional levels.

For him, the top national priority was the reconstruction of the country, an enormous task that required the support of the entire nation.

Dr Neves said it was time for the citizenry to close their ranks and together give their best for the progress and the welfare of all, starting with those who had been directly and disproportionately affected, given the circle of fragility in which they lived.

He noted that during the electioneering, he had spoken of the need for all to join hands, minds and hearts, saying the people had understood the deep meaning of that message and gave it their full democratic backing at the ballot boxes.

Dr Neves indicated that eliminating extreme poverty and the fight against all forms of social exclusion must be understood as ethical imperatives and, as such, should illuminate the broader effort to mobilise the nation.

He noted that from the onset, it was necessary to create more opportunities for women, especially women heads of households, a reality that could not be concealed but respected and valued as a fact of the country’s history.