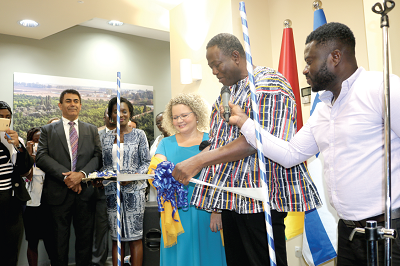 The Embassy of Israel in Ghana has moved into a permanent office on the eighth floor of the Manet Towers at the Airport City in Accra.

The building was constructed in a record time of six months by a Ghana-based Israeli company, Rolider, and the office occupies a full floor of 800 square metres within the towers.

Welcoming guests to the official opening of the new office, the Israeli Ambassador to Ghana, Mrs Shani Cooper-Zubida, said the embassy had now been equipped with “the most advanced technology and digitisation equipment to facilitate work”.

She said the location of the embassy would allow staff to work to further enhance the already good relations between Israel and Ghana in the areas of agriculture, homeland security, health, renewable energy and water.

Mrs Cooper-Zubida said the embassy was operating on three areas and outlined them as government to government, business to business and people to people.

“On the political aspect, the political team is working on government-to-government relations and agreements, while at the commercial level, led by our Trade and Economic Mission, we work on strengthening the economic ties and encouraging Israeli and Ghanaian companies to work with each other.

“Also, we work on our people-to-people relations with our upgraded consulate services to meet our public relations,” Mrs Cooper-Zubida said.

The Israeli Embassy in Ghana, which also serves Liberia and Sierra Leone, was formerly located at Cantoments, sharing the same compound with the Embassy of Mexico at Plot 16, First Circular Road address.

Responding on behalf of the government, the Minister of Chieftaincy and Religious Affairs, Mr Samuel Kofi Ahiave Dzamesi, congratulated the ambassador and her staff on working hard to secure a permanent office for the embassy.

He was hopeful that the inauguration of the embassy would boost relations between the two countries.

Mr Dzamesi traced the bilateral relations between the two countries from 1956, when Ghana was the first country from Black Africa to establish diplomatic relations with Israel.

He said even though the diplomatic ties between the two countries waned in the 1970s, they had bounced back and currently the Israeli government continued to support Ghanaian agricultural students to learn about greenhouse technology.

The minister said the training fitted in perfectly with the Ministry of Food and Agriculture’s flagship programme, Planting for Food and Jobs.

Touching on pilgrimage, Mr Dzamesi revealed that in 2017, his ministry drew a flagship programme to help religious adherents to embark on a week’s pilgrimage to the State of Israel.

“Since its inception in 2017, the ministry has facilitated the travel of about 500 Ghanaians to the State of Israel. I wish to state that all the pilgrims returned to Ghana after the various trips,” he said.