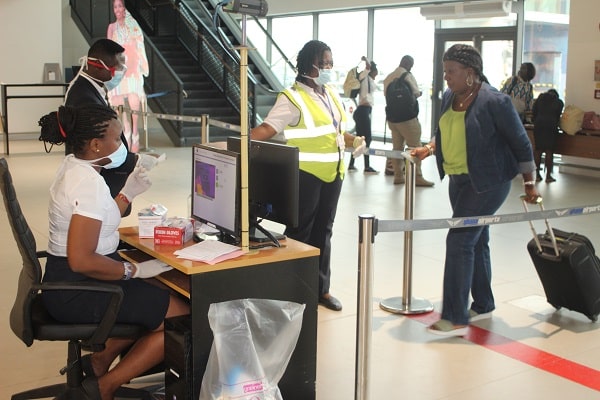 Some passengers who have arrived at the Kotoka International Airport being screened for the coronavirus. Picture: GABRIEL AHIABOR
30.5k Shares

As a new strain of the coronavirus spreads out in China and becomes a growing global concern, the Ministry of Health (MoH) has extended  enhanced passenger screening at the Kotoka International Airport (KIA) to all international arrivals.

The filling of health declaration forms by only passengers with connections from China, which began on January 24, 2020, now covers all arrivals at the KIA.

The ministry said the enhanced measures included the modification of the health declaration forms at the airport to suit surveillance demands due to the outbreak of the respiratory disease.

Also, the Greater Accra Regional and the Tema General hospitals had been designated as initial case management centres, while the Noguchi Memorial Institute for Medical Research (NMIMR) had been designated for investigations in any suspected case, it said.

According to the ministry, case management teams had been put in place to manage cases at designated management centres and were currently undergoing orientation.

Speaking to the Daily Graphic in Accra yesterday, the Public Relations Officer (PRO) of the ministry, Mr Elorm Ametepe, said the Minister of Health, Mr Kwaku Agyemang-Manu, had, after a high-level technical meeting, issued an official release in relation to surveillance updates.

Providing additional information on the enhanced surveillance mechanisms, the statement said the ministry had instructed regional health directors to designate special holding and treatment centres in their respective regions.

“We are preparing to designate more centres in highly populated areas such as Accra, Kumasi, Takoradi and Tamale,” it said, adding: “Screening for fever using walk-through thermometers and non-contact thermometers was also ongoing at the KIA and other points of entry.”

It mentioned other surveillance measures to include the development of social media messages on the disease for the public, with the aim of helping people to practise the necessary preventive measures.

The statement outlined other preventive measures such as regular washing of hands with soap under running water, using alcohol hand rubs, where necessary, and keeping a distance of at least one metre from a person showing signs of fever, cough and difficulty in breathing.

It cited other preventive measures to include staying physically active, drinking plenty of water, eating well and healthily, reducing stress and getting enough sleep.

It also entreated the public to avoid touching the eyes, nose and mouth with unwashed hands, in case of contact with a sick person or potentially affected surfaces or objects.

Furthermore, it called on people to seek treatment immediately at the nearest health facility if infections were suspected, if symptoms showed or when advised by a health worker.

The statement further said a case definition had been developed to guide clinicians to detect potential cases and how to manage them appropriately.

It said alerts on the outbreak had been sent to all regions and teaching hospitals, including all points of entry, while sensitisation of all health workers was currently ongoing, especially for those at the points of entry.

“The MoH continues to work hard with the World Health Organisation (WHO) and other partners to continuously monitor the situation and institute measures to prevent an outbreak or cases in the country. We call on the public and all stakeholders to support efforts at preventing the 2019 nCoV in the country,” it added.

The Head of Port Health at the KIA, Mr Gideon Aquaye, confirmed the enhanced measures for the coronavirus at the KIA to the Daily Graphic, saying the Ghana Airports Company Limited (GACL) had put in place special arrangements to screen all passengers arriving in the country.

He said aside from all passengers filling the health declaration forms, the scanning process had been enhanced with three thermal scanners, as well as an equipped holding or isolation room to keep persons or passengers who showed symptoms of the virus.

"We have put in place measures to ensure active surveillance, early detection, isolation and case management, contact tracing and prevention of onward spread of infection should a person with the virus enter the country through the KIA," he said.

He observed that the arrangements adopted were the best at the moment to protect the country against the deadly coronavirus.

“At the moment, most airports around the world are using the same equipment and processes to protect themselves against the deadly coronavirus because there is no specific cure or vaccine," Mr Aquaye said.

A new strain of coronavirus is spreading around the world after originating at a seafood market in the central Chinese city of Wuhan.

The virus has been confirmed in 16 countries.

The virus started spreading from animals to humans and now human-to-human transmissions are taking place.

In China, 106 people have died, with more than 4,515 cases recorded as of last Monday, forcing the country to step up its response to the crisis by restricting movements and closing tourist sites.

Cases have also been confirmed in Europe, North America and several Asian countries.

Cote d’Ivoire is dealing with a suspected case of the virus.

This development has stoked fears of a global pandemic.

Asked whether there had been any suspected case at the KIA, Mr Aquaye answered in the negative, and explained that the GACL would not relent in its quest to ensure that Ghana protected itself against diseases.

"Given the current health concern, we are working in accordance with international health regulations to ensure that no coronavirus-infected person enters the country through the KIA," he said.

He said passengers would go through scanners to check their temperatures to determine any anomaly.

"The scanning process will determine whether a passenger should be allowed to go or be kept for further examination in the holding room,” he added.

After its last meeting on January 22, the WHO recommended that people should take simple precautions to reduce exposure to and transmission of the virus, for which there is no specific cure or vaccine.

The UN agency advised people to cover their mouths and noses with a flexed elbow or tissue when sneezing or coughing and also share their travel history with healthcare providers.

People should also avoid direct and unprotected contact with live animals and surfaces in contact with animals when visiting live markets in affected areas and avoid eating raw or under-cooked animal products and exercise care when handling raw meat, milk or animal organs to avoid cross-contamination.