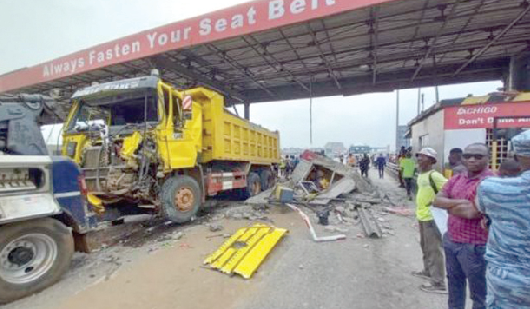 Flashback: An accident scene on the Tema Motorway which led to the death of a toll attendant and destruction of a toll booth Follow @Graphicgh

The Director-General of the Motor Traffic and Transport Department (MTTD) of the Ghana Police Service, Deputy Commissioner of Police (DCOP) Francis Aboagye Nyarko, says despite efforts being put in to curb road crashes and their attendant fatalities, human error continues to be the major cause of havoc on the roads.

According to him, indiscipline and disregard for traffic rules by many motorists had kept accidents at "an increasingly worrisome level".

DCOP Nyarko was confirming data his outfit had released on road crashes during the Christmas period.

Provisional data from the MTTD indicate that 81 people were killed in road crashes across the country between December 19 and 25, 2021.

During the same period in 2020, Ghana recorded 67 deaths through crashes.

They indicated that 378 people were injured and 53 pedestrians were knocked down during the period.

The Ashanti Region recorded 20 deaths, the highest number of deaths recorded within the period nationwide, while 15 people were killed in the Eastern Region, 14 in Greater Accra, 10 in Tema, six in Western North, four in Volta, three each in Upper East and Bono East, two in Central and one each in Western, Bono, Northern and North East.

DCOP Nyarko said it was worrying that despite all the efforts being put in to curb the menace, particularly ahead of the Yuletide, some drivers chose to be careless behind the wheels.

“The figure for December 19 to 25 indicates that those who were injured were 378, while 81 people also died throughout the country; it is increasingly very worrisome.

“It is basically due to people's indiscipline on our roads and carelessness behind the wheels. It is the key factor. They don’t respect traffic rules and regulations. They have not even seen the content of the traffic regulations and so they don’t abide by them. That is very problematic,” he said.

In a related development, 14 lives were lost in road traffic crashes (RTC) that occurred on the Accra-Tema Motorway between January 1 and December 30, 2021, according to the Tema Office of the Ghana National Fire Service (GNFS).

Some 145 others also suffered varying degrees of injuries within the same period.

The statistics indicated that 37 RTCs were recorded on the motorway as of December 30, 2021.

Road crashes remain an issue of concern on the 19.5km dual carriageway that links the Port City of Tema to Accra.

The motorway also forms an integral part of the Trans-Africa Highway, stretching from Lagos through Lomé, Accra and Abidjan to Dakar.

The concrete-constructed Accra-Tema Motorway, which was completed in 1965 during the administration of Osagyefo Dr Kwame Nkrumah, Ghana's first President, has developed many potholes.

The springing up of factories, residential apartments and scores of illegal structures along the Accra-Tema Motorway has increased human activity along the stretch, another factor contributing to the alarming rate of accidents on the stretch.

Although the government has promised major rehabilitation works on the motorway, with work originally scheduled to commence in the first quarter of 2019, work is yet to start.

The rehabilitation will involve the expansion of the carriageways and the provision of interchanges to ease travel time on the road.