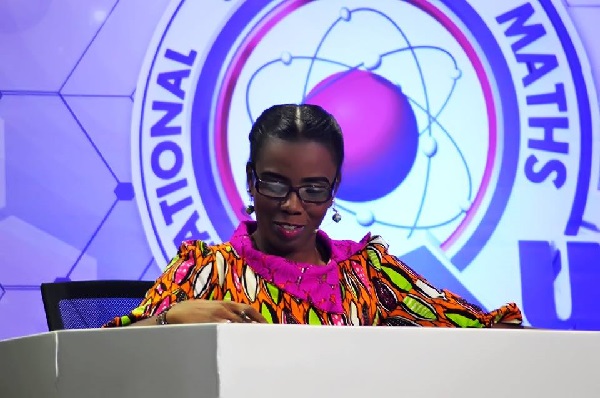 Biomedical Engineer, Dr Elsie Effah Kaufmann, will be entering unchartered waters when she takes over as Guest Editor of the Daily Graphic today, but she is determined to make the most of the opportunity.

Aware of the  fact that the Daily Graphic is the conscience of the nation, the academic, who is well known as quiz mistress of the National Science and Mathematics Quiz (NSMQ), is hoping to use the platform she will be presented with today to again set a tone for a national discourse on Science, Technology, Engineering and Mathematics (STEM) for national development.

Last Thursday, she was as much in the spotlight as the young men who battled for the coveted NSMQ title. However, today, she will be in the saddle as she leads the Daily Graphic Editorial Team to determine the mood and the discourse of the nation.

While she has been familiar with and comfortable being in front of the cameras as Quiz Mistress, Dr Kaufmann said being an editor of a newspaper as significant as the Daily Graphic would be a new experience.

“Yes, I have been used to the cameras as I assume the seat as the Quiz Mistress for the NSMQ, but have never done anything in print apart from granting interviews, so I am excited about the opportunity and intend to make the most of it,” she said of the role.

The Guest Editor series is an initiative to celebrate the 70th anniversary of the Graphic Communications Group Limited (GCGL).

As Guest Editor, Dr Kaufmann will chair the editorial conference for today, which is part of the production of tomorrow’s edition of the Daily Graphic.

Also, it will be a platform for her to share her wealth of experience in her career path.

She is the fourth guest after the Managing Director of Stanbic Bank Ghana Limited, Mr Alhassan Andani, the General Secretary of the Trades Union Congress (TUC), Dr Yaw Baah, and a former Editor of the Daily Graphic and also former Minister of State, Ms Elizabeth Ohene, assumed the role in that order when it began last May.

Dr Kaufmann, also a Senior Lecturer and Founding Head of the Department of Biomedical Engineering of the University of Ghana, said she had followed with keen interest the series and was honoured to be part of the programme.

She said she was particularly enthused about the role, knowing that she would play a role in setting the national agenda and discourse for the day.

“The first Guest Editor, Mr Alhassan Andani, said the Daily Graphic determines the mood of the nation per the stories it publishes, and that makes it a very crucial role which can not be taken lightly.

“I’m, therefore, honoured to be part of this role, even if for a brief moment,” she said.
She said per her role, she also hoped to encourage more conversation on leveraging the opportunity the NSMQ gave in advancing the course for STEM in national development.

Dr Kaufmann has contributed immensely towards the development of science education at all levels in Ghana and beyond and has been the Host and Quiz Mistress of the Ghana National Science & Mathematics Quiz TV Programme since 2006.  She is a member of the Scientific Programmes Committee of the Next Einstein Forum and member of the Ghana National Committee of the United World Colleges. She sits on the boards/ advisory councils of the West Africa STEM hub.

As a reflection of her hard work and achievement, Dr Kaufmann has received a number of prestigious local and international awards.

She was the recipient of University of Ghana’s Best Teacher Award for the Sciences in 2009 and a winner of the prestigious International Women’s Forum Leadership Foundation Fellowship in 2011.

This fellowship enabled her to acquire certificates in Leadership Development from the Executive Education Programmes of INSEAD, Singapore and Harvard Business School, USA. In 2017, she became the Impact Africa Summit Laureate for Education in Ghana, an award that recognised her “exceptional and continuous contribution to science education in Ghana and for being a role model and inspiration to many young girls, activities which are vital to achieving Sustainable Development Goals 4 and 5”.

In 2018, Dr Kaufmann received the Leading Women Achievers Award from the Global Women Economic & Social Empowerment Summit (GWESES). She is also the recipient of the National Society of Black Engineers’ 2018 Golden Torch Award for International Academic Leadership in recognition of her excellence in support of academics on an international level and exhibition of commitment to the STEM fields.

A product of Aburi Girls’ Secondary School, she passed with distinction and proceeded on scholarship to the United World College of the Atlantic in Wales in 1988 where she obtained an International Baccalaureate Diploma.

Her educational journey all began at ATTC Demonstration School, Winneba and Nana Kwaku Boateng Experimental School, Koforidua where she started her primary education.