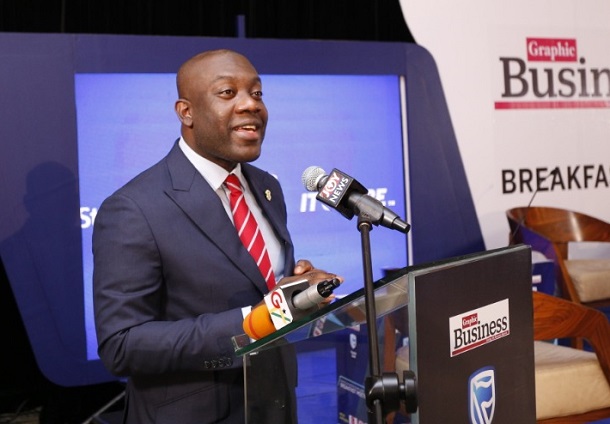 The Minister of Information, Mr Kojo Oppong Nkrumah, has charged the media in the post-crisis recovery era, to be partners in complementing government’s efforts to revive the economy from the economic downturn.

This, they should do by highlighting the opportunities and amplifying the successes of the government and businesses.

He said there was the need to re-engineer an economic recovery across Africa at a time when media penetration was deepest, which meant that the impact of the media to either spur that process or derail it could not be discounted.

Mr Oppong Nkrumah was delivering the keynote address at the Graphic Business/Stanbic Bank breakfast meeting at the Labadi Beach Hotel in Accra yesterday.

The meeting, held on the theme: “Media and marketing communication post-COVID-19: A catalyst for socio-economic resurgence”, brought together policy makers, captains of industry, media and communication practitioners and people in academia.

It was held as an in-person event, while a link was provided for others to participate virtually.

The notable personalities present included the Chairman of the National Media Commission, Mr Yaw Boadu-Ayeboafoh; the President of the Ghana Journalists Association, Mr Roland Affail Monney, representatives of the Chartered Institute of Marketing, Ghana and the Advertisers Association Ghana.

The Information Minister intimated that the government would continue to provide the needed platform, framework and support required for the recovery and expected all stakeholders, including the media, to also play their roles effectively to attract the needed business.

“We are at the most critical time in the recent economic history of our continent. Therefore, this is the time to rally round the flag and, indeed, rally round the continent-wide effort to recover.

“This requires a common purpose from policy makers, private sector players and the media. It is the only way to guarantee our common success.

“On the part of the government, we will continue to provide support for the media industry through fair regulation, capacity enhancement programmes and support to the general economy, which should in turn help the industry. In return, the media should also help project the country to the outside world,” he added.

Mr Oppong Nkrumah said a lot of literature pointed to the fact that without the media and marketing communication adequately playing the role of positive amplification, the full potential of economic growth and development might not be achieved.

That, he said, meant that even in ordinary times, if the country wanted to fully achieve its economic goals and development potential, strong marketing communication and media support was required, noting that in times like this, after a pandemic, it was even more than required.

“We need to deal with the tendency among some media practitioners who think that our only job is to be a check on the government and the ills of the private sector. We are in this boat together and part of our job is to positively influence society to support the recovery effort,” he said.

Mr Oppong Nkrumah further noted that if there was ever a time when the country needed to examine the role of the media and marketing communication within the context of unleashing their full economic potential, it was now.

“We are in extremely extraordinary times, which have caused major economic downturns, and with poverty levels already high, especially in sub-Saharan Africa, the need to recover now and quickly is high.

“The pace of recovery and the extent of recovery are determined by many factors, including the interaction between the efforts of the government and the media,” he stressed.

The Information Minister said evidence suggested that a strong rallying of the public around the recovery efforts of a country made a huge impact on the success story.

“For any set of interventions to be successful, it must gain the goodwill and the support of the people. And the people will only support these recovery policies if they understand them well through a credible media,” he noted.

He said that meant that policy makers must also adopt broad-based, proactive, robust and repetitive marketing communication strategies to get everybody on board.

Also speaking at the breakfast meeting, a digital marketing and communication expert, Mr Stephen Boadi, commended the media for their role in educating and informing the public at the peak of the COVID-19 pandemic.

“They sometimes did this at the risk of even losing revenue, and that must be commended,” he said.

Mr Boadi said there were, however, some disruptions by some digital media outlets which used their platforms to publish fake and false information.

“Because we are in a digital world, everybody is a publisher, and it’s easy to put out content. So we had people publishing all sorts of junk content that disrupted what was going on,” he said.

He advised the mainstream media to insist on adherence to the ethics of the profession and not fall for the pressure from social media.

“The trend is that people are going to social media to find news and discover brands, but we will always go back to traditional media to validate what we see on social media,” he said.

The Managing Director of the Graphic Communications Group Limited, Mr Ato Afful, in his welcome address, said the media and marketing communication industry had also experienced its fair share of the pandemic.

He noted that at the height of the first wave and the post-lockdown period, newspaper sales dwindled, while advertising and sponsorship revenue also plummeted.

He said there was, therefore, the need for quick economic recovery, saying the media had a clear responsibility and mandate to help restore hope and confidence in Africa and its people.

The Managing Director of Stanbic Bank Ghana, Mr Kwamina Asomaning, noted that the breakfast meeting had become a platform for critical deliberation on issues that bordered on national development.

He said that was in line with the bank’s quest to drive growth in Ghana, adding that the bank was proud of what the platform had become.

Mr Asomaning acknowledged the media as one of the most powerful pillars in society, for which reason the country should harness their power for economic growth.