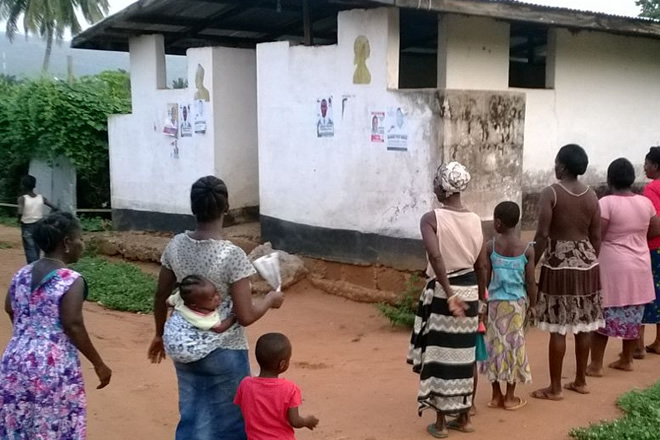 Ghana has made strides towards achieving universal access to toilet facilities.

Within the past six years, the country has moved the coverage in terms of access to toilets from 23 per cent to 59.3 per cent.

Stakeholders in the Water, Sanitation and Hygiene (WASH) sector attributed the progress in coverage of lavatories to the implementation of the Greater Accra Metropolitan Area Sanitation and the Water Project (GAMA-SWP), which has now been expanded to Kumasi, and other interventions.

In an interview with the Daily Graphic ahead of the World Toilet Day (WTD) to be marked today, Saturday, November 19, the National Coordinator of the GAMA-SWP, George Asiedu, said 44,110 household toilets had been constructed in the Greater Accra and Ashanti regions in the past six years.

He said 39,321 of the household toilets had been constructed in the Greater Accra Region in addition to 406 units of institutional toilets that were constructed in 250 schools, reaching over 200,000 students.

Mr Asiedu added that although the project had barely started in the Greater Kumasi Metropolitan Area (GKMA) in the Ashanti Region, it had constructed 4,789 so far.


The sanitation engineer added that by the end of 2024, the project was expected to take the number of household toilets in the GKMA to 24,000 more and 2,000 more for GAMA.

“As of 2015, the situation was bad, with access to toilet facilities across the country ranging around 15 per cent, while 60 per cent of the population was using shared toilet facilities, which was not good at all.

“The 2021 PHC figures show that we have come far by increasing access to toilet facilities to 59.3 per cent and reduced the usage of public toilets to 23 per cent. Open defaecation also reduced from 8.2 per cent to 6.2 per cent; and this is good,” he added.

That assertion is supported by the 2021 Population and Housing Census (PHC) conducted by the Ghana Statistical Service (GSS) which showed that toilet coverage in Ghana had hit 59.3 per cent, with public toilets accounting for 23 per cent, while 17 per cent had no toilets.

In spite of the gains, the Daily Graphic has observed that the over 40 per cent of the country’s population without access to toilet facilities either use public toilets or defaecate in the open.

Also, slum communities remain the weakest link in the quest to achieve Sustainable Development Goal (SDG) 6.2.
A visit to some of the slum communities, including Chorkor and Old Fadama, both in the Greater Accra Region, showed that some of the public toilets were not in good shape.

For instance, at Old Fadama, some of the toilet facilities mostly found in wooden structures, were dilapidated and gave off an offensive smell.

The sanitation condition in these toilet facilities was horrible as many of them still used receptacles and did not have handwashing materials.

Although Chorkor had some public toilets in good physical structures, the sanitation condition was questionable.

An operator of one of the public toilets at Chorkor Alomo Junction, Baba Saani, said the cost of maintaining the facility had risen sharply recently.

“We collect GH¢1 from people who come to use our toilet. In the past, we could get about 300 people using the toilet, but now, we get about 200 people and the cost of cleaning this place has increased. The price of parazone and other chemicals we use for cleaning has also shot up,” Mr Saani said.

In addition, he said the cost of dislodging the faecal matter also kept increasing every month.

A manager of one of the public toilets, Joseph Lartey, also said the cost of maintaining the facility as against the revenue generation was bad.

Some members of the public who use those toilet facilities bemoaned the horrible conditions in the facilities. They also said it was difficult to pay GH¢1 anytime they used public toilets.

For instance, 43-year-old Jacob Lartey said he resorted to open defaecation whenever he had no money to pay for the use of a public toilet.

“Anytime I do not have money, I go to the seashore to do my own thing because that place is free of charge,” he said.

From the interactions with the residents of the area, they were worried about their current situation. They need household toilets but they do not have the means of acquiring them.

Apart from the slum communities the Daily Graphic visited in Accra, some parts of the country also do not have reliable toilet options and therefore defaecate in the open.

This development puts the country’s effort to achieve universal access to toilet facilities and improved sanitation in a precarious situation.
Ghana loses over $290 million every year to poor sanitation, according to a Water and Sanitation Programme of the
World Bank 2012 study titled ‘’Economic Impacts of Poor Sanitation in Ghana.’’

The study also pegged the cost of open defaecation for the country at $79 million.

Again, the indirect effects of malnutrition, to which poor water and sanitation contribute 50 per cent, according to the World Health  Organisation (WHO), cost even more than the direct effects, taking the total health cost to 5.2 per cent of annual GDP in Ghana.

This study also demonstrates that poor water and sanitation significantly contribute to malnutrition, which leads to lower school productivity and work productivity from impaired cognitive function and learning capacity.

In economic terms, Ghana needs to make a minimum of GH¢12.24 billion capital investment, which translates into containment costs, emptying and treatment cost.

With the increasing threats of climate change, evident in increased extremes such as flooding and droughts, it will become even more important to invest in appropriate toilets to ensure the availability and safety of these facilities.

It is estimated that nearly two million people should have access to basic sanitation service each year until 2030 when the deadline for achieving the SDGs will be due.

Touching on how to ensure access to toilet facilities, Mr Asiedu said more investment would have to be made in the construction of toilet facilities for the country to stand any chance of achieving SDG 6. 2 by the 2030 deadline.

SDG 6.2 states: “By 2030, achieve access to adequate and equitable sanitation and hygiene for all and end open defecation, paying special attention to the needs of women and girls and those in vulnerable situations.”

Mr Asiedu observed that to consolidate the gains and brighten the country’s chances of achieving sustainable
development goal (SDG) six by 2030, it was important to scale up the GAMA initiative to other parts of the country.

The sanitation engineer stressed that if a definite decision must be taken to scale up the GAMA project, “it must be done now.”

“We should not postpone any intervention or effort because we are too close to the SDGs deadline. We have an approach that is working, so we should not delay in scaling it up and taking it across the country at a go. If that is done, we should be able to achieve our target,” he added.

He said the bio-digester toilets that were introduced and promoted by the GAMA project provided an opportunity for slum settlements to get household toilets since less space was required to construct them.

The Executive Secretary of the Coalition of NGOs in Water and Sanitation (CONIWAS), Basilia Nanbigne, said there was a strong correlation between safely managed sanitation and groundwater.

She, therefore, said it was crucial for all communities to have access to improved toilet facilities and prioritise proper waste management to prevent groundwater pollution.

While commending the GAMA-SWP for helping to improve access to toilet facilities, the development professional called for a deliberate government policy, particularly targeted subsidy, for the poorest population which could not afford toilet facilities.

She also called for the strict enforcement of laws that required landlords to incorporate toilet facilities in their buildings.

The CONIWAS executive secretary also observed that in the wake of the climate crisis and illegal mining activities that were threatening the safety of surface water, more attention must be given to underground water.

"Surface water bodies are drying up because of climate change issues while galamsey operations are equally destroying rivers. Therefore, we need to take action to preserve groundwater from being polluted by faecal matter from poorly managed toilets," she said.

She underscored the need for stronger collaboration from all stakeholders to ensure improved access to toilet and basic sanitation facilities.

Meanwhile, the Ministry of Sanitation and Water Resources has called on all Ghanaians to ensure that they build, own and use improved toilet facilities at home.

Making a statement on the floor of Parliament last Wednesday, the Deputy Minister of Sanitation and Water Resources, Amidu Issahaku Chinnia, said the ministry was working with other stakeholders to "aggressively pursue the one house one toilet initiative to ensure that households get decent toilets in their homes."

Mr Chinnia said a total of 200,000 toilets would be added to the number of toilets in the country next year.
Again, he said the ministry was facilitating the constitution of toilet facilities in selected schools and health facilities across the country.

"We will also collaborate with the Ministry of Justice and Attorney-General to set specific days aside to try sanitation cases which include construction of toilets," he said.

The deputy minister added that the Sanitation Ministry would work with the Ministry of Local Government, Decentralisation and Rural Development and the Metropolitan, Municipal and District Assemblies (MMDAs) to ensure that toilets and other sanitary facilities in public institutions were kept clean and safe at all times.

He stressed the need for all stakeholders to work together towards improving access to toilet facilities, especially so when the SDGs were just eight years away.

"In a country where there are more mobile phones per household than toilets, we need to continue talking about the need to have toilets in all homes and institutions in Ghana. This, I believe, will help maximise the health, economic and social benefits of toilets among the people of Ghana," he said.

Since 2013, World Toilet Day has been celebrated annually to raise awareness of some 3.6 billion people living without access to safely managed sanitation.

The day also serves as a rallying point for collective action to tackle the global sanitation crisis and achieve SDG 6 - Sanitation and water for all by 2030.

This year, the celebration of World Toilet Day focuses on the impact of the sanitation crisis on groundwater.
With the slogan, “Making the invisible visible”, the 2022 campaign explores how inadequate sanitation systems spread human waste into rivers, lakes and soil, polluting underground water resources.

The focus of the campaign on groundwater is against the backdrop that it is the world’s most abundant source of freshwater.

The theme is particularly apt because in the wake of the worsening climate crisis, coupled with sporadic population growth, groundwater is vital for human survival.

The theme for this year's commemoration is: “Sanitation and Groundwater” with a campaign tag “Making the invisible visible”.

Juxtaposing this theme with the fact that a whopping 18 per cent of households in Ghana still practise open defaecation or do not have access to toilets at all should be a major concern for all well-meaning Ghanaians.