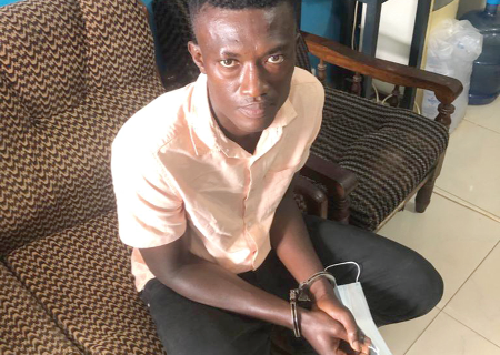 The police have exhumed the intestines of one of the Abesim murder victims from a cocoa farm.

The intestines were exhumed last Tuesday after police investigators had discovered that Richard Appiah, the man arrested in connection with the murder of three children at Abesim in the Bono Region, had buried them in the cocoa farm in the town.

The acting Director-General of the Public Affairs Directorate of the Ghana Police Service, Assistant Commissioner of Police (ACP) Mr Kwesi Ofori, said the intestines would be sent to the Police Hospital in Accra for pathological analysis and forensic examination.

He said two machetes with bloodstains on them had also been retrieved, saying it was believed that they were used by Appiah to commit the crimes.

Appiah, 28, was arrested on August 20, 2021, for allegedly killing three children and keeping some body parts in a fridge in his room.

The suspect is alleged to have murdered his stepbrother and two others, aged between 12 and 15 years.

He was arrested after a relative of one of the victims had reported to the Sunyani Police about his missing son on August 20, 2021.

Later, another suspect, whose name has been withheld by the police, was arrested in connection with the murder.

Meanwhile, officials of the Counselling Unit of the Police Service have commenced counselling family members and residents of Abesim and Alaska to alleviate the mental stress they have gone through following the murder of the three boys.

The counsellors arrived in Sunyani to support the affected families, and community members.

Yesterday, the counsellors carried out similar counselling for the families of the victims and residents of the two communities.

The Police Service appealed to the residents to support the police with information that would lead to the arrest of other criminals behind the killings.

During the counselling sessions, the affected families and community members were given the opportunity to ask questions bothering their minds.

Some of the concerns raised were how long investigations would last, insecurity in the communities and poor visibility in some areas during the night.

Briefing the media after the counselling sessions, the Director of the Counselling Unit, Assistant Commissioner of Police (ACP) Ms Phyllis Osei, said the manner in which the children were murdered and the discovery of suspected body parts in the fridge were traumatic experiences for the affected families and community members.

She said the counselling team was able to manage the situation by giving the affected people tremor-reducing therapy, in addition to grieving processes.

“As we speak, we have engaged community members, who have been gripped with fear and panic, because they are asking themselves a lot of questions, including whether people who live with them can engage in gruesome and horrific murders,” ACP Osei said.

Furthermore, she said, the team was able to address concerns such as emotional issues, explaining that through the process, the police had provided the people with some healing, after the people had poured out their grievances and concerns.

ACP Osei said after the interaction with the affected families and community members, "they are now better off than their previous conditions".

“This is a plus for the acting IGP and the whole Police Administration. This is a novelty and we are very proud to be associated with this innovation that has been crafted by the acting IGP,” she added.

ACP Osei said the service would later hand over the counselling exercise to the Ghana Psychological Association for continuation.

She explained that the affected families and community members would continue to receive counselling services after the burial of the remains of the victims.

She said the service, in collaboration with community leaders, would come up with an action plan which would be implemented to ensure that lives and properties were protected in the area.