13 Media personalities to be honoured 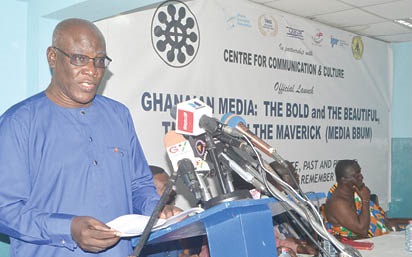 The Centre for Communication and Culture has launched an initiative to celebrate 13 veteran and practising media persons and friends of the media who have contributed in various ways to the development of the media in the country.

The initiative, dubbed: “Media in Ghana: The Bold, Beautiful, Ugly and the Maverick” (Media BBUM), was launched in Accra yesterday.

The others are a former President of the Ghana Journalists Association (GJA), Kabral Blay-Amihere; a former broadcast journalist, Kwaku Sakyi-Addo; the Managing Editor of the New Crusading Guide, Abdul Malik Kweku Baako, and a former Editor of the Ghanaian Chronicle, Nana Kofi Coomson.

They will be presented with mementos, citations, among others, in Accra on September 21, 2022.

At the launch, the Executive Director of the Centre for Communication and Culture, Enimil Ashon, said for 13 weeks from July through to September this year, there would be interviews with the legends at peak times on GTV.

“On September 21, Kwame Nkrumah’s birthday, there will be a public ceremony at one of the nation’s up-market hotels where the legends will be honoured with mementos, citations and unnamed surprises,” he said.

He said the “bold” were journalists who used their pens or microphones to crusade against abuse of office by the powers-that-be in government, business and politics.

The “beautiful”, he said, were the legends who gifted the people admirable “penmanship and arresting style and excellent word-smithing”.

The “mavericks”, on the other hand, were individuals in society who, although not trained or practising journalists, used their independent mindedness to confront injustice and succeeded in effecting changes to laws, power and social structures, he added.

“Legends selected for honour are chosen on the basis of their fearless pursuit of crusading journalism. Relentlessly they questioned policy, exposed wrongs and fought the high and mighty in society. Theirs was fair, objective and balanced journalism pursued with integrity and principle,” Mr Ashon said.

“Through the mass media, they also fought wrong laws, defied unjust decrees, especially decrees aimed at imposing or maintaining a culture of silence,” Mr Ashon, who is a former Editor of the Ghanaian Times, said.

The Omanhen of the Essikado Traditional Area, Nana Kobina Nketsia IV, who was the special guest at the launch, said that there was hope for a positive change in Africa, and that the individuals being celebrated by the non-governmental organisation provided that hope.

“They are being celebrated for rare human values and cultural essence which are currently vanishing from the continent,” the eminent traditional ruler said.

“Recently, a journalist openly confessed to his involvement in fabricating and marketing stories to impugn the integrity of a personality in politics,” he said.

Nana Nketsia said for the sake of freedom and justice, it was his prayer that those who were being elevated into legendary status would have their works and lives studied and scrutinised to serve as examples for others to follow.