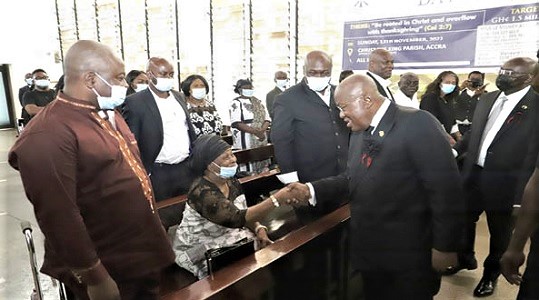 The 40th Martyrs Day, which commemorates the abduction and killing of three Justices of the High Court and a retired Army officer, was yesterday[June 30, 2022] marked with a solemn church service at the Christ the King Catholic Church in Accra.

The four were abducted from their respective homes in Accra on June 30, 1982, and murdered at the Bundase Military Range in the Accra Plains.

As a result, June 30, every year has been declared Martyrs Day by the Ghana Bar Association (GBA) and the Judicial Service when a series of events are organised in memory of the judges.

The event was attended by President Nana Addo Dankwa Akufo-Addo, a member of the GBA; Vice-President Dr Mahamudu Bawumia; the Chief Justice, Kwasi Anin Yeboah; the Attorney-General, Godfred Yeboah Dame, and the President of the GBA, Yaw Acheampong Boafo.

Also in attendance were judges of the Superior Courts and the lower courts, lawyers, staff of the Judicial Service and family members and loved ones of the three judges, including the late Justice Agyepong's widow, as well as his son, Kwabena Agyepong, a former Presidential Spokesperson.

Mr Boafo, who read the history of the murder of the judges, said on July 1, 1982, it was announced that the three judges and the retired military officer had been abducted.

“The nation’s worst fears became a reality when it was announced that the three judges and the retired military officer had been brutally and savagely murdered on the night of their abduction,” he said.

Mr Boafo said widespread condemnation by the citizenry compelled the military junta at the time, the Provisional National Defence Council (PNDC), to set up a special investigations board over the killings.

He said in response to calls for reconciliation by the National Reconciliation Commission (NRC) and the Biblical injunction that says trespasses must be forgiven, the Judiciary and the Bar had forgiven the wrongdoers.

“Justices Poku Sarkodee, Koranteng-Addow and Agyei Agyepong, the Bar, the Bench and the people salute you. You died in the line of duty.

You performed your duties as judges without fear or favour. You stood for the rule of law,” Mr Boafo added.

The GBA President said the unfortunate incident must constantly remind the people not to entertain acts or utterances that had the tendency to threaten the democracy of the country.

“We must all appreciate that an imperfect constitutional democracy that gives the opportunity to citizens to either change governments or extend their mandate is a far better option than any form of military adventurism, where our lives and opportunities will be at the whims and caprices of some lawless few,” he said.

Mr Boafo entreated the media not to allow their platforms to be used by some people to destroy the country’s democracy, peace and stability.

Delivering the sermon, the Parish Priest of the Christ the King Catholic Church, the Very Rev. Fr Andrew Campbell, urged the public to use the death of the three judges as a reminder to be more tolerant and forgiving towards one another.

He said inasmuch as others hurt us, there was the need for people to have a forgiving heart and love one another, adding: “The more we love, the more we can forgive, and the happier we can become.”