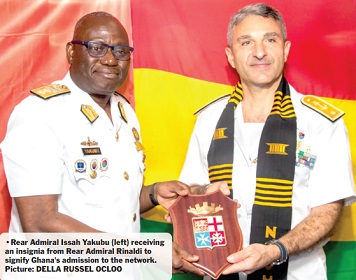 Ghana has been admitted into the Virtual Maritime Traffic Centre and Trans-regional Maritime Network (VMTC &TMN).

The system is a virtual network connecting the maritime operation centres of member navies as an information-sharing mechanism among participants.

The network is based on a model that relies on a software developed by the Italian Navy which enables real-time virtual sharing of information related to merchant shipping in digital mapping.

At a ceremony aboard an Italian Navy ship (ITS),Nave Borsini, at the Tema Port to admit Ghana to the network, the Chief of the Naval Staff (CNS), Rear Admiral Issah Yakubu, described the development as strategic, saying it would enhance the country’s maritime domain awareness and build stakeholder confidence to ensure improved information sharing, especially in the fight against crime at sea.

"Given the evolving threats and fluid maritime security situation in the region, Ghana's admission to the VMTC & TMN is relevant and timely," he added.

Rear Admiral Yakubu also said the virtual traffic system had user friendly features,including a three-dimensional map module that would help the centre gather and share information in a timely manner for prompt action at sea.

The strategic importance of the Gulf of Guinea (GoG) maritime domain,he furthersaid,had made it susceptible to some security challenges, including piracy, illegal and unregulated fishing and the trafficking of drugs and other illicit products.

“In our quest to curb these challenges, countries ought to recognise the need for stronger collaborations at all levels to aid the development of sustainable strategies and commitments to deal with these challenges,” Rear Admiral Yakubu said.

According to him, maritime security issues were beyond the scope of any single Navy, hence the need for joint efforts to win the fight against crimes at sea and ashore.

He also underscored the importance of Operation GABINIA, an anti-piracy exercise undertaken by the Italian Navy frigate Luigi Rizzo in the GoG maritime domain on behalf of the EU to improve maritime security in the region, which he said had seen an increase in the number of foreign vessels call.

Rear Admiral Yakubu appealed to the Italian authorities to make provision for Ghanaian naval personnel to undertake training exercises aboard their country’s frigate.

He expressed appreciation to the Italian Navy forits assistance,which ensured the admission of Ghana to the network,saying it would go a long way to improve maritime security.

The Commanding Officer of the Third Naval Divisional, Rear Admiral Valentino Rinaldi, commended the Ghana Navy for the progress made in ensuring that Ghana’s waterways were protected from the incidence of crime.

He gave an assurance that the request to build the capacity of Ghanaian naval officers would be considered.