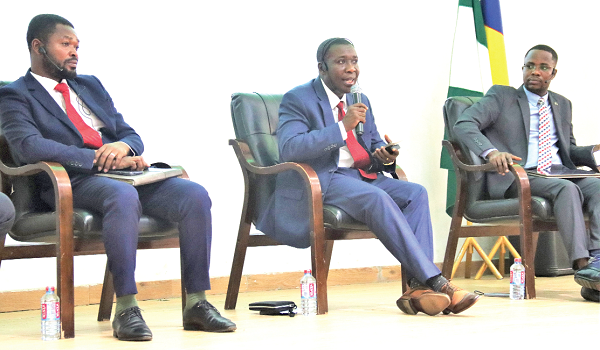 Panelists at an economic dialogue at the Pentecost University (PU) in Accra have urged the government to prioritise its expenditure, suspend long-term capital intensive projects and focus on the basic needs of the people following the prevailing challenges in the country.

They said the measures should also include cutting down on the size of the government and avoiding duplication of roles by public institutions to ensure efficiency.

The panellists included the Head of the Economics Department, University of Ghana, Prof. William Baah-Boateng, and Dr Alexander Amo Baffour and Dr Bismark Owusu-Sekyere of the PU.

According to the acting Head, Business Development and Corporate Affairs of the PU, David Kyetong Guun, the maiden dialogue was instituted to collate views from panellists and participants to make an input into the government's budget.

The forum was on the theme: “Turning Ghana’s economic wheel to sustainable growth prospects”.

The panellists further urged the government to ensure effective coordination of all sectors of the economy to sustain growth.


They equally advised the citizenry to exhibit a high sense of nationalism and patriotism, as well as cut down on unnecessary expenditure to support efforts to get the country out of the woods.

Setting the tone for the discussions, Prof. Baah-Boateng said the economic challenges facing the country might seem to many as unprecedented but said the country had experienced such turbulent times before.

He said the slowdown of economic growth in 2022 led to the rapid rise in inflation and high depreciation of the local currency by 54.6 per cent in 10 months.

The unemployment rate had also risen from 13.4 per cent in 2021 to 13.9 per cent in the second quarter of this year, thereby worsening the poverty and inequality situation in the country.

Prof Baah-Boateng traced the prevailing economic crisis to the COVID-19 pandemic, the Russia-Ukraine War and other domestic factors.

He also mentioned revenue leakages and corruption as contributory factors.

Among the solutions he proffered were a review of the public procurement system to ensure value for money and prudent management of the public debt.

He also called for the completion of abandoned projects and stressed the need to consider the fiscal implications of legislation and governance decisions.

For their part, Dr Baffour and Dr Owusu-Sekyere suggested that in order for the country to avoid going to the IMF for the 18th time, there was the need to leverage agricultural mechanisation to boost the manufacturing and the export sectors.

They said by implementing such measures, the government would be addressing the structural challenges of the economy.