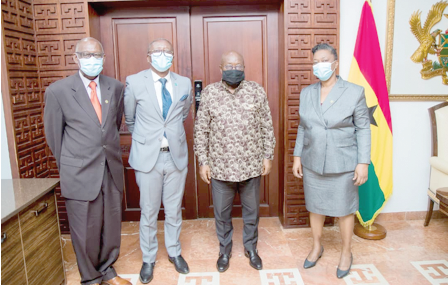 The two were accompanied by the Chairman of the Engineering Council of Ghana, Mr. Abbey-Sam.

The purpose of the visit was to introduce Mrs. Carlien Bou-Chedid, the newly inaugurated fifth President of FAEO, to President Akufo-Addo.

The team also took the opportunity to introduce Mr Leslie Ayeh as the President-Elect for the West African Federation of Engineering Organisation (WAFEO) to the President.

Mrs. Bou-Chedid briefed the President about FAEO and the fact that it represented engineering organisations on the continent.

She also informed President Akufo-Addo about FAEO goals, in particular, the intention to harmonise standards for engineering education practice and goods.

Mr. Ayeh told President Akufo-Addo that as part of his terms of reference, he was to harness the potential uplifting of the image of West Africa.

He informed the President that he had been trumpeting the President’s Ghana Beyond Aid agenda across Africa because he saw it not only as a Ghanaian agenda, but a continental one which should ensure the positive change on the continent.

President Akufo-Addo congratulated Mrs. Bou-Chedid and Mr. Ayeh on their new roles in the engineering organisations, and assured them of government’s backing during their tenures, and assigned a Deputy Chief of Staff, Mr. Fawaz Aliu, to liaise with them as an assurance of the governmental support of their new roles, which he described as good news and a big responsibility.