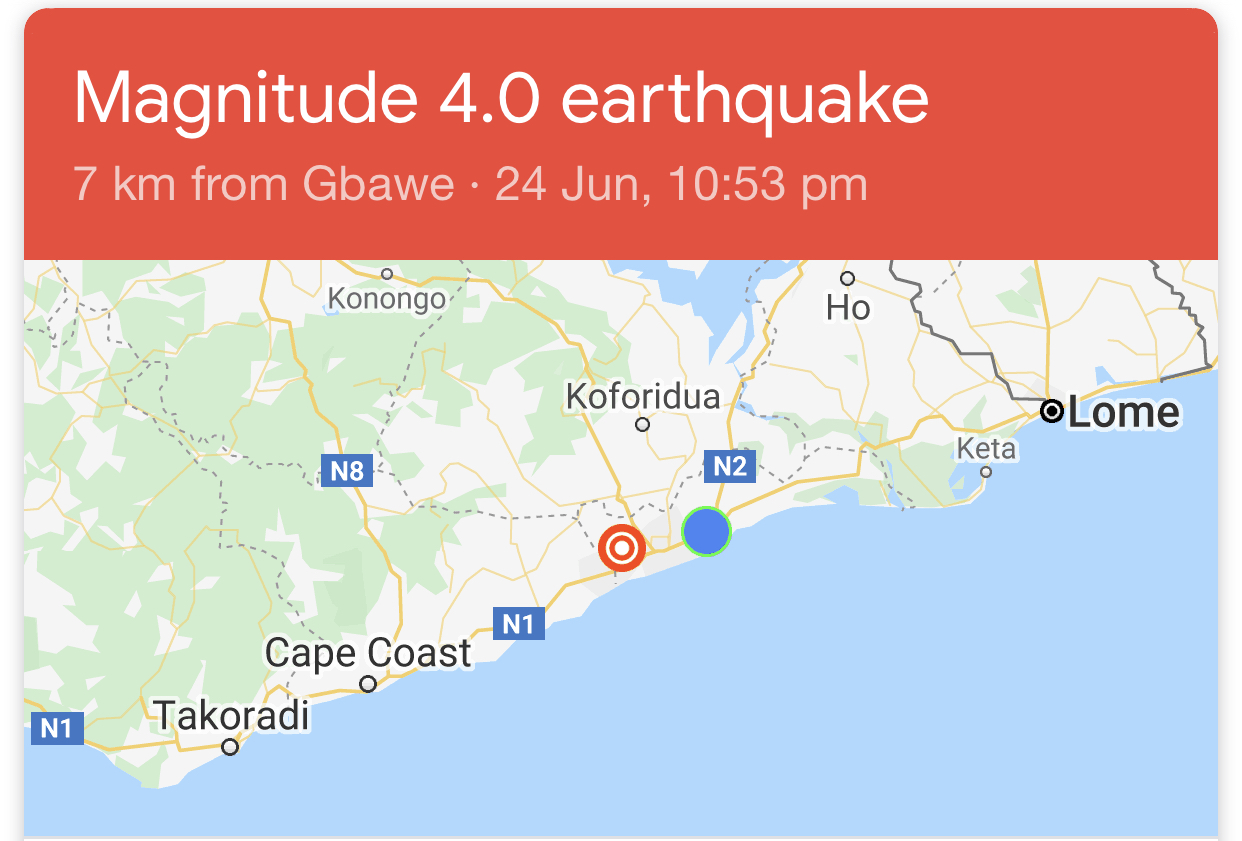 Parts of Accra were shaken by a fleeting earth tremor Wednesday night which threw residents into fear and panic.

According to the USGS (United States Geological Survey), it recorded a magnitude of 4.0 with a 10.0-kilometre depth at 10: 53 pm and occurred at 6 km from Gbawe in Accra.

It was felt three times in the space of 10 minutes and shook buildings, creating panic among residents.

Many residents reported on social media that they felt the earth shaking on Wednesday night, June 24, 2020.

In Adabraka and Nima, there were reports of people running out of their homes to seek refuge in open spaces.

What a CCTV in someone's house captured on Wednesday night in the Ghana tremor.

The Earthquake report worldwide on Wednesday, June 24 showed incidents in various parts of the world.

There were no quakes measuring Magnitude 6+ to Magnitude 9+ within the period.

The 10 largest earthquakes in the world recorded in the period were:

Already, the Ghana Geological Survey Authority (GGSA) has warned that the series of tremor occurrences in parts of the Greater Accra Region over the years is signal of a looming earthquake of greater magnitude in the future.

On March 24, 2018, a similar earth tremor that measured 4.0 on the Richter scale was recorded in Accra.

On December 9, 2018, another one was experienced in Accra.

The Richter scale is a scale of numbers used to tell the size of earthquakes. Charles Richter developed the Richter Scale in 1935.

If the scale is less than 2.0, it means that the earthquakes are very small and are unlikely to be felt by people.

Between 2.0 and 2.9 on the scale, people do not feel the earthquakes, seismographs are able to detect them.

Beyond 5.9  on the scale, earthquakes can cause serious damage to lives and property over large areas.

The epicentre of the fault line is thought to be located around the McCarthy-Weija Dam catchment area.

Since 1615 and 1939 when Ghana experienced its severest earthquake with a magnitude of over 6.0 on the Richter scale, there have been reported yearly occurrences of fleeting earth tremors.

According to the GGSA, signs picked up after earth tremors hit parts of Accra on March 24, 2018, showed that the fault lines were active, which meant that an earthquake could occur at any time.

The fast-sprawling town of Kasoa in the Central Region and Gbawe in the Greater Accra Region have shared the most spoils in occurrence.

In 2014, a similar situation was reported, which caused the Chief Executive Officer of Development Geo-Information Service (DeGEOSERV), at the time Prof. Emmanuel Amamoo-Otchere, to caution residents of the affected areas to either relocate or take steps to protect their buildings against earth tremors.

On January 12, 2006, a tremor measuring 3.7 on the Richter scale hit parts of the capital, according to the Geological Survey Department.

Suburbs of the capital, such as Dansoman, Weija, Ashale Botwe, Madina, East Legon, La Trade Fair and Sakumono and their adjoining communities all felt the earth movement.

Parliament, in 2016, passed legislation to empower the demolition of a number of houses and other structures along the Accra-Cape Coast main road that are close to earthquake fault lines.

The legislation, the Ghana Geological Survey Authority Act, seeks to reduce the impact of disasters related to earthquakes, volcanic and other seismic activities throughout the country.

It established the Ghana Geological Survey Authority, with the mandate to advise the government on geo-scientific issues relating to mineral resources, the environment and hydro-geology.

It will also promote effective dissemination of information on geological hazards and ensure the effective exploration and exploitation of mineral resources in the country to ensure standards of professional conduct and efficiency in geological matters.

Below are some reactions on social media

Who experienced the earth tremor at 10:50pm.

The thing has happened twice ei.

Earth Tremor three times in few minutes. Hmmm. Who else experienced it? #earthTremor

Third Earth Tremor in Accra under 15 minutes.
That fault line from McCarthy Hill through to the Accra Central where there was a major earthquake in 1939 must be shifting.#Ghana #Accra #earthtremor

Please who is experiencing the earthquake in north Kaneshie