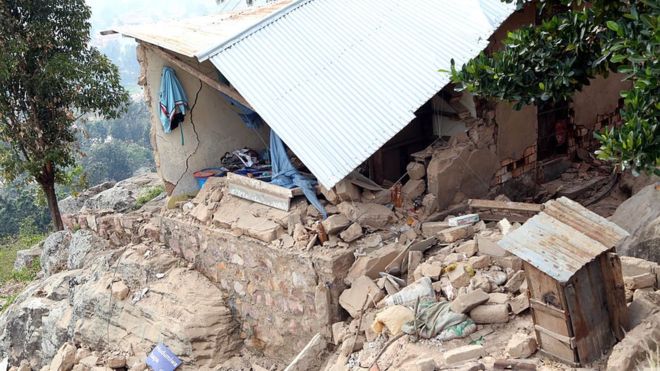 The Ghana Geological Survey Authority says the series of tremor occurrences in parts of the Greater Accra Region over the years is signal of a looming earthquake of greater magnitude in the future.

It said the magnitude of the earth tremor that occurred in some parts of the country last Sunday was 4.0 on the Richter scale.

The Richter scale is a scale of numbers used to tell the size of earthquakes. Charles Richter developed the Richter Scale in 1935.

If the scale is less than 2.0, it means that the earthquakes are very small and are unlikely to be felt by people.

Between 2.0 and 2.9 on the scale, people do not feel the earthquakes, seismographs are able to detect them.

Beyond 5.9  on the scale, earthquakes can cause serious damage to lives and property over large areas.

Speaking to the Daily Graphic in Accra yesterday, the acting Director of the Geological Survey Department (GSD), Dr Daniel Boamah, called on all stakeholders to take the necessary precautionary measures to reduce the impact of the looming danger.

He warned that those occurrences, two of which had been recorded this year, should not be taken for granted.

“This minor earthquake is a warning to get us prepared for a bigger one, but when the bigger event will occur, we do not know,” he said.

As a precautionary measure, Dr Boamah recommended that all residents of the affected areas should seek professional advice for a seismic and geotechnical evaluation of the sites where their structures were located to determine the hazards and possible solutions.

Seismic evaluation involves the use of scientific methods, such as artificial vibrations, to establish potential deficiencies in existing buildings to determine the possible impact of an earthquake on the structure.

Geotechnical evaluation is meant to obtain information on the physical properties of soil earthworks and foundations for structures to help identify and repair distress to earthworks and structures caused by subsurface conditions.

“Where engineering solutions exist for the level of seismic hazards, the buildings should be retrofitted, so that they are able to withstand the effects of an earthquake,” Dr Boamah said.

He explained that in instances when there were no  engineering solutions, residents should resettle for their own good or consider putting up wooden structures which were safer and performed better during earthquakes.

He said the incidence of an earthquake had a return period, so once there had been a major earthquake of magnitude 6.5 on the Richter scale in Accra in 1862 and 1939, it could recur and could be of a bigger magnitude.

Dr Boamah recommended that houses that were prone to serious hazards but had no engineering solution should be demolished.

Meanwhile, the Minister of Environment, Science, Technology and Innovation, Professor Kwabena Frimpong-Boateng, has urged Ghanaians to ensure that their buildings are designed in such a way to withstand earthquake, writes Musa Yahaya Jafaru from Parliament.

Speaking with journalists in Parliament in Accra yesterday in reaction to last Sunday's tremor that Gbawe and Weija in Accra experienced, he said an earthquake was a natural occurrence and so it could not be prevented.

"An earthquake is a natural phenomenon. It also helps regulate systems. So there is nothing we can do about this. We have to do things that will make whatever we do earthquake proof. So we have to trust that God will continue to protect us as he has done for millions of years," he said.

Parts of Accra were shaken by a fleeting earth tremor last Sunday which threw residents into fear and panic. It was the second time an earth tremor had occurred in the affected areas in 2018, with the first occurring on March 24, 2018.

The affected communities have often been referred to as earthquake-prone areas.

The epicentre of the fault line is thought to be located around the McCarthy-Weija Dam catchment area.

Since 1615 and 1939 when Ghana experienced its severest earthquake with a magnitude of over 6.0 on the Richter scale, there have been reported yearly occurrences of fleeting earth tremors.

The Ghana Geological Survey Authority (GGSA) has, over the years, warned of an imminent earthquake in the country following the tremors that have been occurring in recent times.

According to the GGSA, signs picked up after earth tremors hit parts of Accra on March 24, 2018 showed that the fault lines were active, which meant that an earthquake could occur at any time.

The fast-sprawling town of Kasoa in the Central Region and Gbawe in the Greater Accra Region have shared the most spoils in occurrence.

In 2014, a similar situation was reported, which caused the Chief Executive Officer of Development Geo-Information Service (DeGEOSERV), at the time Prof. Emmanuel Amamoo-Otchere, to caution residents of the affected areas to either relocate or take steps to protect their buildings against earth tremors.

On January 12, 2006, a tremor measuring 3.7 on the Richter scale hit parts of the capital, according to the Geological Survey Department.

Suburbs of the capital, such as Dansoman, Weija, Ashalley Botwe, Madina, East Legon, La Trade Fair and Sakumono and their adjoining communities all felt the earth movement..

Parliament, in 2016, passed legislation to empower the demolition of a number of houses and other structures along the Accra-Cape Coast main road that are close to earthquake fault lines.

The legislation, the Ghana Geological Survey Authority Act, seeks to reduce the impact of disasters related to earthquakes, volcanic and other seismic activities throughout the country.

It established the Ghana Geological Survey Authority, with the mandate to advise the government on geo-scientific issues relating to mineral resources, the environment and hydro-geology.

It will also promote effective dissemination of information on geological hazards and ensure the effective exploration and exploitation of mineral resources in the country to ensure standards of professional conduct and efficiency in geological matters.