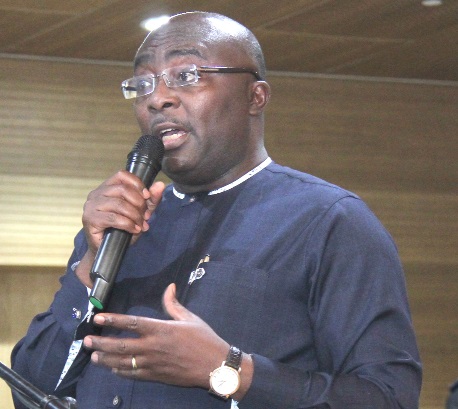 The Vice-President, Dr Mahamudu Bawumia, has urged African Parliaments to find new ways of doing business that focus on a collective approach to delivering the requisite public goods and services for citizens.

"We cannot relent in our efforts to ensure that we live by the ideals and principles of an all-inclusive government; the government of people, by the people and for the people", he stated

Dr Bawumia made the call when he delivered the keynote address to open the 82nd executive meeting of the Commonwealth Parliamentary Association, Africa Region, at the Labadi Beach Hotel in Accra on March 8, 2022.

The meeting is held twice every year to plan the activities of the association and to discuss issues of concern to members.

There would be another conference later in Sierra Leone, where the issues that came up for discussion at the meeting would be presented.

The CPA, Africa Region, comprises 63 national and sub-national legislatures and provides parliamentarians of member countries the opportunity to deliberate on pertinent issues and build consensus on areas of common interest to deepen parliamentary democracy, good governance and promote human development.

Dr Bawumia, in calling for innovative ways of engagement by parliamentarians, cited the current composition of Ghana's Parliament to buttress his point.

He said Ghana’s current hung Parliament, was an indication of a voter population that desired consensus building for a unified political force, rather than the divisive, overly partisan, winner-takes-all intolerant political system, which was the norm in many African countries.

"This emerging trend close-to-parity in numbers of seats in Parliament between majority and minority parties as obtains also in Sierra Leone behooves us to perhaps begin to adopt in our procedures and processes, new ways of doing business", he told the Parliamentarians.

Touching on the recent threats to the democratic gains made on the continent, Dr Bawumia urged the parliamentarians to strengthen their constructive engagements with their respective Parliaments in support of their governments for lasting solutions to the myriad of issues confronting their citizens.

"As parliamentarians, the recent spate of military interventions in our sub-region should give us cause for concern as democratic governance was gradually coming under threat on the continent. In the event of any instability, it is always the Legislative arm of government that suffers the brunt," he said.

He, therefore, called on the parliamentarians, whom he described as trustees of the people’s authority to jealousy guard the democratic gains since they were directly in contact with their constituents all the time.

That, he said, could be achieved when they harnessed their collective efforts in furtherance of the public interest.

He used the occasion to laud the strides made in the number of women parliamentarians across the globe, saying it was heartwarming to note that the trend of under-representation of women in legislatures was changing across the globe and that must be sustained.

He said according to the Inter-parliamentary Union, the year 2020 was marked by continued gradual progress for women in Parliament, recording 0.6 points increase despite the unprecedented COVID-19 pandemic and its impact.

He gave an assurance that Parliament would continue to hold the Executive accountable and called on the CPA to review its constitution to enable it to meet the demands of the times than to remain a charitable organisation.

The Speaker of the Parliament of Sierra Leone and President of the CPA, Africa Region, Dr Abass Chermor Bundu, said the association would continue to work to promote parliamentary democracy in member countries, help sustain the democratic gains made and promote gender equality and emancipation of women.

The Majority and Minority Leaders of Ghana's Parliament, Messrs Osei Kyei-Mensah-Bonsu and Haruna Iddrisu, who also took turns to address the meeting, said parliamentarians on the continent would continue to play their roles effectively to deliver the public goods and services to the citizenry of their respective countries to help sustain the democratic gains.