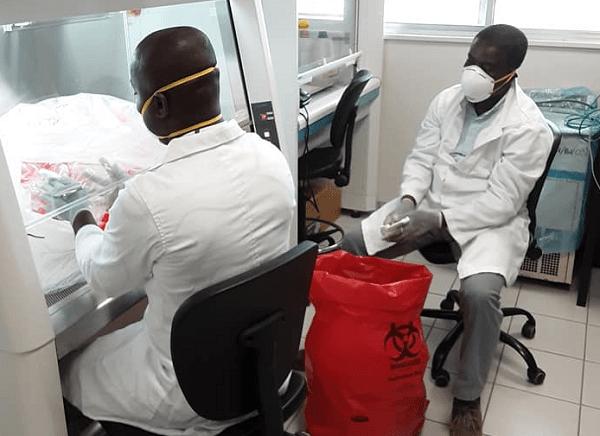 Scientists at the University of Ghana have obtained critical data about the genetic composition of the COVID-19 strains in Ghana.

The data was obtained from viral strains in 15 of the confirmed cases in the country and would help scientists gain a comprehensive understanding of the variations of the virus that are present in the country.

A statement issued by the University’s Public Affairs Directorate on Saturday said the feat was attained by scientists at the Noguchi Memorial Institute for Medical Research (NMIMR – College of Health Sciences) and the West African Centre for Cell Biology of Infectious Pathogens (WACCBIP – College of Basic and Applied Sciences) at the University.

It said the success achieved was a significant milestone in Ghana’s response to the pandemic, as it would strengthen surveillance.

How was it done?

According to the statement the scientists have successfully sequenced genomes of SARS-CoV-2, the virus responsible for the global COVID-19 pandemic.


It explained that Genome sequencing allows for the compilation of the most comprehensive information about an organism‘s genetic makeup.

Using advanced next generation sequencing methods, scientists are able to track and compare viral mutations to understand the origins of imported strains and to discover if any novel strains are emerging locally.

Nine samples were taken from individuals who had no travel history, who are believed to have acquired the infection locally.

How will it help the COVID-19 fight?

According to the Director of the NMIMR, Prof Abraham Anang, the successful establishment of this sequencing capability at University of Ghana would strengthen surveillance for tracking mutations of the virus and aid in the tracing of the sources of community infections in people with no known contact with confirmed cases.

The Director of WACCBIP, Prof Gordon Awandare, explained further that the data obtained from the samples indicate that Ghana is dealing with the same pathogen, and that it has not yet changed its genetic make-up significantly.

“The data tells us that, while there were some differences between the strains from the various countries, all the 15 genomes generally resembled (with >92% similarity) the reference strain that was isolated in the Wuhan Province of China, where the outbreak began,” the statement attributed to him.

“It is natural that pathogens will evolve as they encounter different environmental challenges, so we will need to continue monitoring to keep track with these changes and determine how they impact on the efficacy of potential drugs or vaccines that are being developed,” he added.

The statement added that the information from the sequence data has been shared with scientists around the world through an open access platform known as the Global Initiative on Sharing All Influenza Data (GISAID) database, where other sequences from various countries are stored (https://www.gisaid.org/).

“The University of Ghana is proud to note that this feat was achieved entirely by local scientists using established local capacity including our Next Generation Sequencing Core and ‘Zuputo‘, our High Performance Computing system, which are jointly managed by NMIMR and WACCBIP, with support from University of Ghana Computing Systems,” Vice Chancellor of the University, Prof Ebenezer Oduro Owusu said.