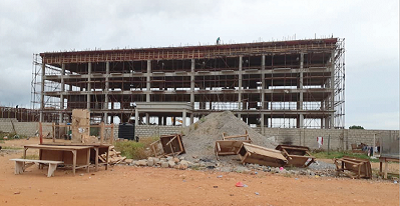 An aerial view of the parcel of land being developed
30.5k Shares

The leadership of the Word of Life Gospel Church in Accra has called on the Ghana Police Service to assist to enforce a High Court order directing a developer, who is trespassing their parcel of land situated at Okpoi-Gonno on the Spintex road, to stop work.

According to a Director of the church, Elder Emmanuel Anane Boate, the church acquired the parcel of land and initially fenced it on two occasions but each time, it realised to its surprise that some land guards and other thugs came to pull the walls down.
He said when the church finally identified the person behind the action, it lodged a complaint with the police.
That, he said, led the Manet Police Station to meet all interested parties in the parcel of land.

“At the end of the meeting, the police advised us to have the matter resolved peacefully at the court, after which we took the matter to the High Court and won an interrogatory injunction restraining the developer from further developing the disputed land,” Mr Boate said.
He said the defendants had, however, flatly ignored the High Court order and continued their development of the land, adding that all efforts to get the assistance of the police to enforce the court order had proven futile.
“When we contacted the Manet Police Station which has jurisdiction over the area, they said they could do nothing about it because they were not directed by the court to halt the construction or enforce the injunction order,” Elder Boate recounted.
The church is, therefore, appealing to the Inspector-General of Police (IGP), Mr David Asante-Apeatu, to direct his relevant commanders, especially the Manet Police Commander, to act in the interest of peace and the rule of law.
Situation
Mr Boate said while the litigation was pending in court, the 4.2-acre land was still being developed against an order by the court.
The church, he said, legally acquired and accordingly registered the parcel of land and had also chosen the peaceful path to resolve the matter, while the other parties involved were using thugs and other illicit means to force their way through, a phenomenon he urged the police to curtail as a disincentive to other persons perpetrating similar illicit acts in other parts of the country.
Mr Boate said the church was happy that the police, the primary law and order enforcement agents, had identified land encroachment, land guard menace and other such illegalities as its major focuses for the year.
“Sometimes the seeming inaction of the law enforcement agencies compels citizens to take the law into their own hands which as a church, we cannot support. It is, therefore, important that the police accords this matter the needed attention,” he added.
Mr Boate said the church believed the case could be used as test case to send a strong signal to other people who were bent on using the back door to acquire property for them to desist.
That approach, he said, was wrecking mayhem and disturbances across the country, especially in the Greater Accra Region.