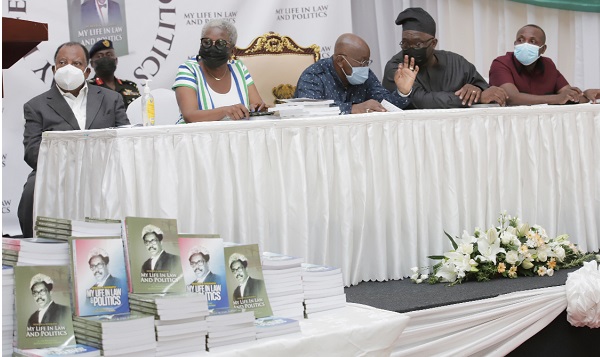 A book that captures the memoirs and biography of Bernard Joao da Rocha, a legal luminary and first Ghanaian Director of Legal Education, has been launched in Accra.

Titled: "My Life in Law and Politics", the 259-page book, with a page signed by President Nana Addo Dankwa Akufo-Addo, was put together by Ms Ayodele Kingsley-Nyinah, da Rocha’s daughter who is also a lawyer.

The 14 chapters of the book have been divided into two parts, with the first part being the biography of the New Patriotic Party’s (NPP’s) first national chairman.

The second part addresses post-independence politics, the formation of new political parties and regimes, the military rule in the country and a lot about himself, his political and legal careers.

The book, which is also filled with great humour, describes some of the cases the first Ghanaian Director of Legal Education did in the law courts, among others.

Launch
Speaking at the launch of the book at the Ghana Academy of Arts and Sciences on March 2, 2022, President Akufo-Addo described the work as a "great book" that would contribute to the democracy, politics and the practice of law in the country, especially when it seemed to be faced with the dearth of literature on the history of Ghana and the development of its democracy.

He noted that the book had come at a real opportune time to address some of the questions, especially for the youth who were getting to understand the real democracy of Ghana.

The President described his late learned friend, popularly called B.J., as a good teacher of the law, director of the Law School, a good lawyer and role model for young lawyers.

"He was a man who did not bear grudges, and you cannot write the history of the Fourth Republic without him," President Akufo-Addo stated.

The President said the late da Rocha, who was also the first Ghanaian Director of the Ghana School of Law when it was opened in 1958, contributed to bringing about reforms in the electoral system of the country when it returned to multiparty democracy in 1992.

“His exceptional views on politics and his personal attribute of forthrightness were worth emulating by the present crop of Ghanaians, especially the youth who want to enter into politics and the legal profession,” President Akufo-Addo said.

He said Mr da Rocha never hid his views on politics in the country during his time and spoke his mind without fear or favour in public.

President Akufo-Addo recalled the time B.J. led the NPP, as its national chairman, to boycott the 1992 parliamentary election that the party thought was fraught with a lot of malpractice and irregularities at that time.

He said although some of the party big wigs at the time did not side with Mr da Rocha on the boycott of the parliamentary election, it was the episode that later led to a lot of reforms in the country's electoral system, for which reason his name could not be left out when the history of the return of Ghana to constitutional rule was written.

A former Minister of State and former Editor of the Daily Graphic, Ms Elizabeth Ohene, who launched the book, said it was worth reading.

She said one of the principles Mr da Rocha stood for was never to attend functions late, as he deemed that practice as disrespectful.

A former Attorney-General and Minister of Justice, Mr Joe Ghartey, who was Mr da Rocha’s student at the School of Law, reviewed the book.

He said it contained a lot of the cases B.J. had done as a lawyer and described the work as a valuable resource for Law and Politics.

Mr Ghartey, who is also a former Second Deputy Speaker of Parliament and former Railways Development Minister, said Mr da Rocha was committed to the rule of law, democracy, justice and hard work and stood tall in political challenges.

Mr da Rocha was also the General Secretary of the Progress Party (PP) in 1969.

The General Secretary of the NPP, Mr John Boadu, said da Rocha served the party with diligence and selflessness, saying even when the party boycotted Parliament in 1992, he was the one who said the party was going to work with the government to move the nation forward.