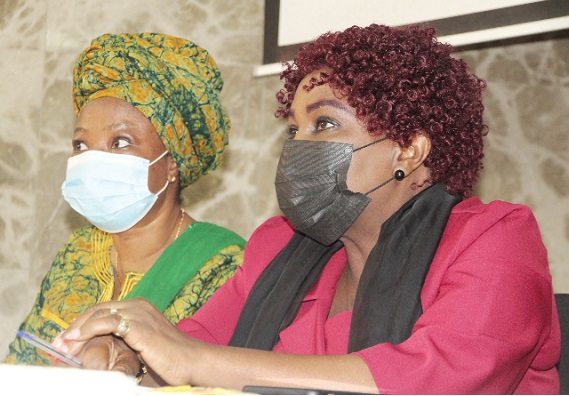 The Caretaker Minister for Gender, Children And Social Protection, Cecilia Abena Dapaah, says there can be no sustainable development if the barriers which hold back women are not addressed.

She said women were an integral part of all facets of development and so it was critical that they were empowered to play their roles efficiently.

“Women are powerful agents of change, and empowering them benefits whole societies. Let’s leave no one behind,” Ms Dapaah, who is the substantive Minister for Sanitation and Water Resources, said when she launched Ghana’s commemoration of this year’s International Women’s Day (IWD) in Accra on March 3, 2022.

The IWD is a day set aside by the United Nations to celebrate the economic, political and social achievements of women, past, present and future.

This year’s commemoration falls on Tuesday, March 8, on the theme: “Equality Today for a Sustainable Tomorrow”, with the campaign theme #BreaktheBias.

The theme seeks to recognise the contribution of women and girls around the world who are leading the campaign on climate change adaptation, mitigation and response to build a more sustainable future for all.

The Media Launch was organised by the Ministry of Gender, Children and Social Protection in collaboration with the European Union in Ghana and Global Affairs Canada.

The launch in Accra brought together all stakeholders, including representatives from the UN.

Ms Dapaah indicated that Ghana had adopted the international theme to join in the global concern about the impact of climate change.

“As we celebrate the tremendous efforts by women and girls in shaping an equal future devoid of the negative impacts of climate change; as we celebrate and recognise the efforts, achievements and successes of women, “let us also strive to break all biases that hinder the rights, promotion, protection and empowerment of women in climate actions,” she said.

She added that the current climate change crisis, coupled with the COVID-19 pandemic, had brought to the fore the need to take appropriate actions that would ensure a better life for all, especially women, girls, the vulnerable and the excluded.

According to her, it had been proved that climate change could have adverse effects on women and girls’ safety and security, which in turn could increase the burden of their unpaid care work and limit their access to natural resources, clean water, food, transport, energy, sanitation, housing, among others.

“Women are early adopters of new agricultural techniques and first responders when disaster strikes. Therefore, interventions to address climate change cannot be successful and sustainable if they do not adequately include women and girls,” she stressed.

The minister further emphasised that achieving gender equality called for concerted efforts from all stakeholders, saying: “We must work together by sharing ideas and best practices to contribute towards a more equal and pleasant society.”

The UN Resident Representative, Ifeoma Charles-Monwuba, said the UN believed women and adolescent girls, including young people, should be empowered and supported to develop innovative solutions that would improve the adaptive capacity of their communities.

Mrs Enyonam Azumah, Team Leader - Human Development, the UK Foreign, Commonwealth and Development Office (FCDO), in an address, said the UK was committed to addressing the root causes of gender inequality as a way of empowering girls and women now more than ever to enable them to have voice, choice and control in their lives.

The Deputy Head of Mission, the European Union Delegation to Ghana, Mr Pieter Smidt Van-Gelder, said not only were women central to advocating a sustainable tomorrow; they were also the ones in the frontline of climate change and environmental degradation.