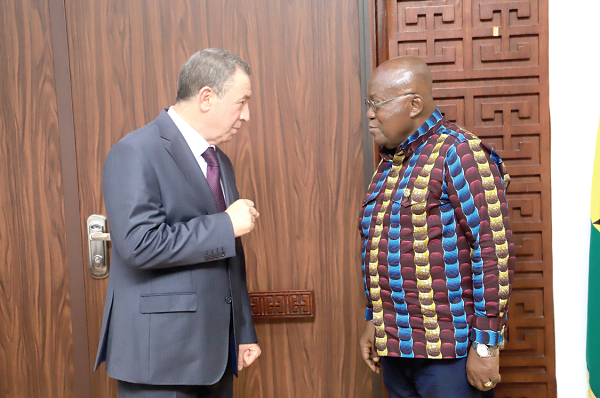 The outgoing Ambassadors of Algeria and Japan in Ghana, Messrs Delileche Youssef and Tsutomu Himeno, on Monday bid President Nana Addo Dankwa Akufo-Addo farewell after their tour of duty of the country.

Mr Youssef described Ghana as a champion in the unity and advancement of African development.

He said that was evident in the many recognitions accorded the country, including the recent election of Ghana to the UN Security Council and the siting of the AfCFTA Secretariat in Accra.

“All these testify to the confidence the international community has in Ghana and the leadership role your country continues to play in the defence of the interest of a stronger Africa,” he added.

He expressed gratitude to the government and the people of Ghana for their respect, friendship and hospitality that allowed him to function effectively.

According to Mr Youssef, Ghana and Algeria had had a long-standing relationship, including sharing the same vision on the development of the continent.

For his part, the outgoing Japanese Ambassador, Mr Himeno, said Ghana and Japan had had close relations over the years, and that the visit by President Akufo-Addo to Japan after assuming office had further strengthened the existing ties between the two countries.

He said one of the areas of their cooperation was the private sector, which had led to some Japanese entities, including the Japan External Trade Organisation (JETRO), establishing their office in Ghana.

He commended President Akufo-Addo for his support to Japanese investment in the country, including the operations of a Japanese power company in Ghana.

Mr Himeno also thanked the President for his attention to the Noguchi Memorial Institute for Medical Research, which he described as a notable symbol of the relationship between Ghana and Japan.

President Akufo-Addo traced the relations between Ghana and Algeria to the days of the struggle for independence by the two nations.

On the Malian political upheaval, he said being neighbours with Mali, Algeria should continue to support efforts at ensuring sustainable peace and stability in that country.

The President also expressed the hope that issues between Algeria and Morocco would be resolved.

He expressed appreciation to the Japanese Ambassador for his contribution towards advancing existing relations between the two countries.

“Japan has been a very strong friend of Ghana. We have achieved many things for our mutual benefit, such as public and private sector investments,” he added.

President Akufo-Addo further gave an assurance that Ghana would continue to create a favourable environment for businesses to thrive in the country.