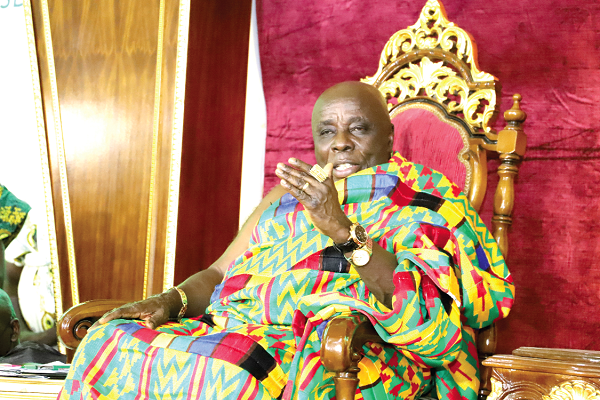 He said reducing poverty required empowering the people to earn decent livelihoods to encourage them to support both local and global interventions.

The Okyenhene, who was addressing participants at a royal dialogue on climate change and the SDGs at the Ofori Panin Fie in Kyebi in the Eastern Region yesterday, added that “sustainable development can only work when the people who live in indigenous areas own the process and the results”.

“The reason the implementation of the SDGs and the fight against climate change have not worked over the years, even though they have made impressive strides in curbing extreme poverty, is that they are somewhere. They have to be local and the people who are going to benefit have to participate,” he said.

The two-day event is being organised as a precursor to the 26th UN Conference of Parties on Climate Change (COP 26).

The dialogue is aimed at championing urgent climate actions under the Paris Agreement and the accelerated implementation of the SDGs.

It will also help make the voices of traditional leaders bear on the national and international discourse on climate action and the attainment of the SDGs.

It is being organised by the SDGs Advisory Unit, Office of the President and the Okyeman Environment Foundation.

The Okyenhene said when poverty and climate change joined forces, it had dire implications on the health and socio-economic well-being of the people.

He said while there was poverty in New York City, London, Johannesburg and Paris, the poor in those cities enjoyed what he described as “poverty within the opportunity”.

“So maybe climate change is important, but we need to beat the war on poverty and we need our developed nations and partners to help us,” he said.

According to him, much of the poverty in Africa was as a result of corruption and exploitation, which he said deprived people access to their own natural resources, quality health care and education.

To that end, he said, the government had established an advisory group of prominent private chief executives who had set up a $100-million SDGs delivery fund and a $200-million green fund to complement the government’s effort at tackling climate change and fund in the attainment of the SDGs.

The Minister of Environment, Science, Technology and Innovation, Dr Kwaku Afriyie, said while striving to attain the SDGs, Ghana would not renege on its values and ethics.

The British High Commissioner, Ms Harriet Thompson, said developing nations such as Ghana had little to do with the causes of climate change, yet faced the consequences of climate impact.