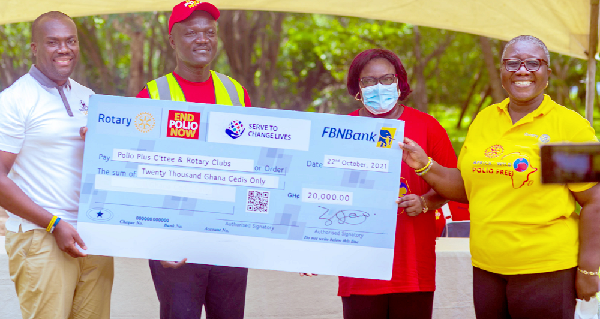 Ghana currently has no capacity to detect poliovirus strains as the sequencer used by the Noguchi Memorial Institute for Medical Research (NMIMR) for testing samples has become obsolete and non-functional.

Although the country has officially not recorded any case so far this year, the current status of the country cannot be established as samples deposited at the research institute cannot be tested until the device is replaced.

The Chairperson of the National Polio Plus Committee of the Rotary International, Nana Yaa Pokua Siriboe, revealed this at the commemoration of the 2021 World Polio Day at Legon last Sunday.

Nana Yaa Siriboe expressed fear that gains made by the organisation in combating the poliovirus could be reversed if the only device in the country to detect the virus was not urgently replaced.

World Polio Day is observed globally on October 24 to highlight global efforts towards a polio-free world and honour the tireless contributions of those at the frontlines in the fight to eradicate polio from every corner of the globe.

The Rotary Club International, which has been at the forefront of the fight for more than three decades, used the occasion to tout its achievements thus far and to also mobilise funds to execute planned projects.

Nana Yaa Siriboe said it would cost about $300,000 to replace the device.

“If we don’t have it working, any sample we pick and send to Noguchi, we would not be able to test and see what is happening, and if we are not careful, it will eradicate all the efforts we have put in place to keep our country clean,” she said.

“If we want to continue to say that Africa is free from the virus, then we need to get the sequencer working,” she added.

While appealing to the public and corporate organisations to support the activities of the Polio Plus Committee, she said the organisation was working assiduously together with its development partners to raise funds to purchase a new sequencer.

Touting the achievements of the Rotary International thus far, Nana Yaa Siriboe said the organisation had since 1985 immunised over two billion children and also contributed over $2.5 billion since 1985.

“Five out of the six continents are free from polio. This year, we have recorded only two cases as against 140 cases recorded last year; one each in Afghanistan and Pakistan,” she said.

She further noted that Ghana would soon phase out the Monovalent Poliovirus vaccine and adopt the Novel Oral Polio vaccine, said to be more effective at combating the vaccine-derived poliovirus.

She appealed to mothers to send their children for vaccination to protect them against polio.