Akufo-Addo will not debate Mahama on infrastructure - Sammi Awuku 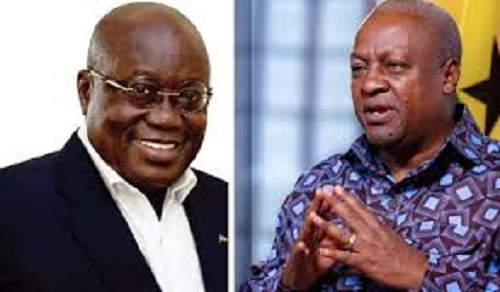 According to the party, there was no need for a debate to tell Ghanaians what the Akufo-Addo government has done in the provision of infrastructure and that Ghanaians “can see those infrastructure for themselves.”

Former President Mahama on Wednesday, August 19, 2020, challenged the Akufo-Addo-led government to a debate over infrastructure in order to settle the issue of whose government has performed well in the area of infrastructure.

Mr Awuku said in the areas of both infrastructure and industrialization, "you don't need someone to tell you about what is happening; you see it, you walk through it... "

He said under the Akufo-Addo-led government, Tamale is having its first interchange and that many other infrastructural projects are being undertaken in many parts of the country.

Commenting on the issue on the same platform, the Deputy Information Minister, Pius Enam Hadzide, said Mr Mahama cannot stand President Akufo-Addo to a debate if Mr Mahama does not employ communist tactics.

He said President Akufo-Addo has achieved an unprecedented record in infrastructure in the Fourth Republic.

According to him, Mr Mahama’s challenge is a ploy to divert attention from the germane issues in the country, and that the "facts are out there for people to verify" the achievements between the two presidents, and added that President Akufo-Addo is not afraid to debate Mr Mahama on infrastructure.

Also speaking on the issue on the same platform, the National Communication Officer of NDC, Mr Sammy Gyamfi said the call "is to settle the contention of whether or not, or who between the NDC and the NPP has a better or superior record of delivery within the period they served this country."

He said Mr Mahama’s infrastructural projects during the time he served as President (2013 to 2016) stands tall in the history of the country’s Fourth Republic than any other Fourth Republican President.

"Our friends in the NPP this week have sought to project a few plagiarized Mahama projects and a handful of mediocre projects as achievements," Mr Gyamfi teased, and added that the NPP is "creating an impression that it is something we have never seen in the history of this country."

According to him, since the NPP believes it has a better record of delivery than Mr Mahama, it was only fair for the two leaders to go into an “eyeball-to-eyeball” type of debate to tell Ghanaians what they have done to settle the issue of who has performed better.