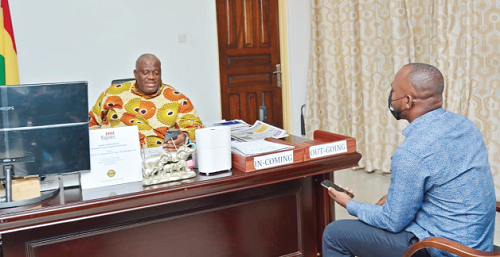 The Greater Accra Regional Coordinating Council (GARCC) has developed a regional charter which will serve as a catalyst to ensure the realisation and sustainability of the “Let’s Make Accra Work” initiative.

The charter, titled “The Accra Bible” seeks to address the complex challenges affecting the region, particularly, the business districts and congested areas.

It will serve as a blueprint that provides guidelines on how to overcome the myriad of challenges in the region to enable Accra become a world-class capital and rub shoulders with other capitals.

The guidelines cut across traffic regulations, security issues, sanitation, education, land sales, among others, as well as the general vision of the region.

The Greater Accra Regional Minister, Mr Henry Quartey, who disclosed the introduction of the charter in an interview with the Daily Graphic, said the GARCC was currently engaging with stakeholders including the Ghana Bar Association (GBA) to fine-tune the charter.

After getting the green light, he said it would be passed on to all the assemblies in the region for ratification after which it would be gazetted to pave the way for its full implementation.

“This Accra Bible contains strategies that will guide my office and ensure that all my successors will have a manual to guide them to help achieve the ultimate goal of making Accra work,” he said.

He noted that the “Let’s Make Accra Work” initiative, since its launch in May this year, had brought a lot of development, particularly in the highly populated areas of the region.

For instance, he said the initiative had improved the sanitation condition of some areas, and also led to a decongestion exercise, which had greatly improved the ease of doing business and movement in the region.

The Regional Minister said the successful implementation of relocation of the onion sellers and scrap dealers from Agbogbloshie to Adjen Kotoku which led to the reclamation of 18.3 acres of land, was a clear indication that the initiative had come to stay.

Mr Quartey said the land had currently been reduced to “ground zero” and the GARCC was working hard to put the land to good use.

Prior to the exercise, he said the National Youth Authority and the Ablekuma Central Municipal Assembly (ACMA) had plans for the area and currently, discussions were still ongoing for the redevelopments of the site.

Aside from that, he said portions of the land had been allocated to the ACMA for the construction of a district hospital.

“For the rest of the land, talks are still ongoing and we are going to use it for something which will benefit the region and country as a whole,” Mr Quartey said.

Going forward, he said the GARCC would continue to engage with the assemblies to revive some of the bye-laws which had become dormant to tackle various problems confronting the region.

Key among them, he said, were bye-laws on sanitation, road traffic as well as those on the operation of motorbikes and tricycles.

Touching on the tricycles, popularly known as aboboyaa, the minister observed that most of them were used for refuse collection activities but had no proper disposal mechanisms.

Due to that, he said, most of them ended up dumping the refuse along principal streets, thus, adding up to the already existing insanitary situation in the region.

In view of that, Mr Quartey said the council was in the process of instituting a bye-law to ban all tricycles from using principal streets and highways in the region.

However, in order not to create a situation that would lead to unemployment, he said waste management companies had been instructed to have transfer sites in their respective assemblies to ensure that the tricycles that engaged in waste collection continued to operate.

Mr Quartey disclosed that a draft had already been prepared by the Attorney-General’s Department and would be launched on August 24 this year.

“We have met with all the stakeholders to deliberate on this draft; we are currently waiting for the announcement of the MMDCEs and once that is done, we will collaborate with them and start enforcing it,” Mr Quartey said.