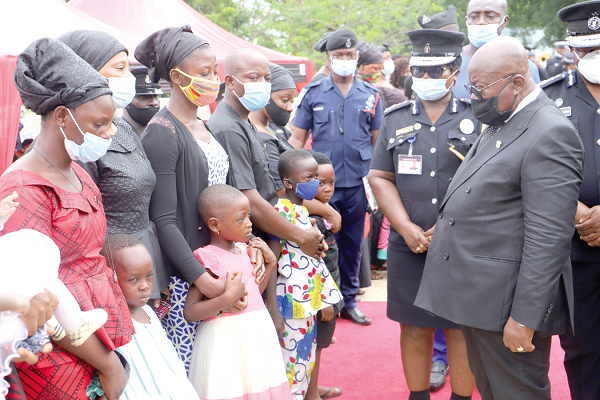 President Akufo-Addo commiserating with some widows and children of the late policemen who fell in the line of duty. Picture: SAMUEL TEI ADANO
30.5k Shares

Fourteen policemen who died in the course of duty this year were immortalised by the Ghana Police Service at the 2020 Police Memorial Day event in Accra yesterday.

The solemn and sombre ceremony to honour the policemen posthumously took place at the National Police Training College at Tesano and was attended by the President, Nana Addo Dankwa Akufo-Addo.

President Akufo-Addo lit the perpetual flame and laid a wreath at the Cenotaph.

Similar events took place simultaneously in all the regional police commands in the country.

The ceremony to immortalise policemen who die in the course of duty is held annually, the first of which took place in 2014.

While 10 of the 14 policemen met their untimely deaths through motor accidents, two got drowned, while another two died from gunshots fired accidentally.

Chief Inspector Justice Aryee fell unconscious, was rushed to the hospital and died on arrival, while Corporal Rexford Amoako was killed by a stray bullet from a colleague’s gun at a crime scene.

The two policemen who drowned while chasing some armed robbers at Krobo, a suburb of Obuasi in the Ashanti Region, and whose bodies were subsequently retrieved from the Oda River on July 17 were identified as Lance Corporals Stephen Kyeremeh and Amedius Akwesi Boateng.

In attendance at the ceremony were the Minister for the Interior, Mr Ambrose Dery; the Inspector General of Police, Mr James Oppong-Boanuh, and the Chief of the Defence Staff, Lt Gen. Obed Boamah Akwa.

President Akufo-Addo later signed a Book of Remembrance and engaged the families of the deceased in good-natured conversation.

Delivering the sermon at the ceremony, the Chaplain-General of the Ghana Police Church, ACP Very Rev. Frank D. Twum-Baah, said the fallen heroes, just like Jesus Christ, had laid down their lives, so that others would have rich and secure lives.

The names of the fallen heroes were engraved on a Wall of Honour, a commemorative wall on which the names of policemen who perish through adversarial or combative action are engraved.

On the other hand, the names of policemen who die in the course of performing lawful duties but not through adversarial actions are embossed in a book referred to as the Roll of Honour.

Eligible policemen are selected by a panel, subject to the approval of the Police Management Board

The membership of the panel and the criteria for selection are set out under the Police Service Instructions.

Policemen who die in the course of lawful duties but are disqualified are not celebrated on memorial days.

Such policemen are those who die through suicide, misconduct, gross contributory negligence and performing duty under the influence of alcohol, narcotics or similar substances.

The 14 policemen immortalised at this year’s Memorial Day brings to 53 the number of policemen who have been honoured posthumously in the past five years.