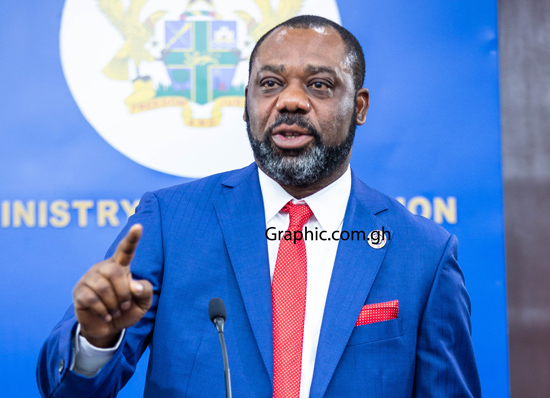 Another academic year is here with us and in less than a month successful Basic Education Certificate Examination (BECE) candidates will be placed in second-cycle schools of their choice.

Over the last two consecutive years, the situation almost degenerated into chaos and that was why this year the GES carefully set aside a month-long period to sensitise the students and parents to the process to enable them to understand the procedures and also make the right choices.

After the month-long sensitisation period, the final-students were also given another one-month to study and carefully select schools under the Computerised School Selection and Placement System (CSSPS) for the next academic year, starting in January 2021.

The students, who had already completed the BECE, were recalled back to their respective schools to pick up the forms and with the assistance of their parents or teachers took time to scrutinise the schools and to choose the five schools they preferred.

They had from Monday, September 21 to Saturday, October 31, 2020 to select the Senior High School (SHS) they would like to attend.

Additionally, the students were encouraged to select at least one technical school or programme, classified under category ‘E’, while every student selected a school with compulsory day status, which must also be within the candidate’s catchment area so that the student could conveniently commute to the school as a day student.

Explaining the selection of schools during the selection, the Director General of the GES, Prof. Kwasi Opoku-Amankwa, said the fifth choice of school could also be the same as any of the candidate’s first four schools chosen, saying, “for instance, a candidate is allowed to choose school ‘A’ as his or her first choice with a boarding status and choose the same school as the fifth compulsory day option.”

Prof. Opoku-Amankwa explained that immediately the Basic Education Certificate Examination (BECE) results were released by the West African Examinations Council (WAEC), “the placement process begins using the candidate’s aggregate from his or her four core subjects (English, Maths, Integrated Science and Social Studies) plus the two best grades from his or her elective subjects,” he further explained.

The GES took pains to execute the sensitisation programme and allowed the candidates to carry the forms home for over a month to fill them before returning them for a simple reason; to prevent what happened last year where some students massed up at the emergency placement centre at the Black Star square for help to secure a school.

A major feature with the placement blues over the years has been the burning desire of parents to change the schools where their children have been placed after realising the students had performed relatively better than what they expected.

At that point, parents feel that their children’s performance does not merit the schools they chose during the selection of preferred schools before the BECE.

This year’s CSSPS, in my view, will be seamless because the selection of the schools was done long after the examination, during which time the candidate is expected to determine whether he or she has the capacity to select a particular school.

All the above should be enough reasons to spare the GES, and by extension the ministry, the sleepless nights that often characterise the placement exercise.

It is expected that with all the effort put in by the GES, this year’s placement exercise should be a seamless one, attracting no commentaries.

It is important that the management of education should not tolerate any attempt by parents to hold them to ransom with the demands that the schools their children have been given should be changed for them.

Such requests should be accepted only based on humanitarian grounds, expertly authorised by either the sector Minister, the Director-General of the GES or as determined by the management body of the education.