Before Madam Rita Nhyiraba Tetteh played the lead role in the first television and radio commercial ‘Me nsa aka ooo’ for Mobile Money Limited (MoMo), a subsidiary of MTN Ghana, she had been featured in a number of commercials, movies and stage productions, but the MoMo commercial is the one that changed her life.

Last Tuesday, in fulfilment of a promise made to her when the service marked its tenth anniversary in 2019, officials from Mobile Money Limited presented a two-bedroom house to Ms Tetteh at Dobro, near Nsawam in the Eastern Region.

According to her, she was shocked when the brand promised to give her the house as they had already done “more than enough” for her after she had worked with them. 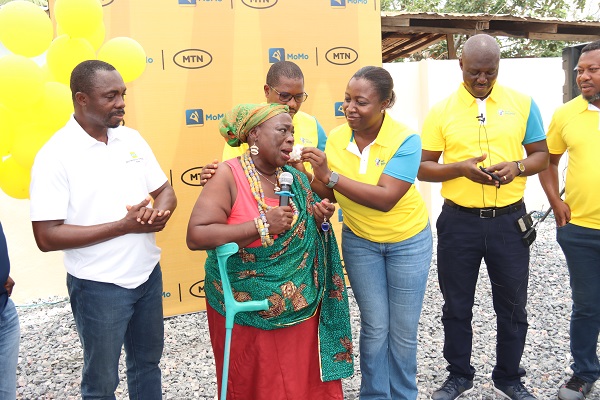 Ruth Badoo (3rd from right), Senior Manager, Mobile Money Operations wipes tears off the face of Ms Tetteh. Looking on are Mr Eli Hini (2nd from right), CEO,Mobile Money Limited and other officials of the company

“I am an actress who has worked with many brands and agencies, just like most of the other characters in the commercial, and I was recruited by an agency and paid for the job. However, the brand’s decision to engage me in their regional marketing and activation tours really transformed my life. I have done many jobs but till date people still call me ‘Me nsa aka ooo’, an indication of how far the commercial travelled in the country.

“On the regional tours, I was paid and given royal treatment. The first time I flew on an airplane, it was for a MoMo job in the Northern Region. There are trips on which they gave me bodyguards, placed me in a convoy... These are luxuries I had never enjoyed in my craft. The brand sees me as part of the MoMo family and over the years, our relationship moved into a personal one. There is no one in the MoMo team who does not have my personal number. They call to check on me regularly and are ready to support me whenever I reach out to them. I can’t find the right words to express my gratitude to them,” an emotional Ms Tetteh told this reporter after the presentation.

‘Me Nsa aka ooo’
The commercial, which was first aired on TV in July 2009 and later converted into radio and print versions, opens with a mother in a village who receives a cash transfer from her son in the city.
When the electronic cash hit the mobile wallet, she started shouting: "Me nsa aka ooo" which means: “I have received it!” in Fante.

Her shouting attracted almost the entire community, who followed her to the river side where she had gone to show her husband who was then paddling a canoe.
She told her husband she had received a cash transfer from their son in the city.

Perplexed, a little boy, also seated in the canoe, asked: “Na sika no wo hen”, to wit: “But where is the money?” which made everyone go silent.
The commercial then switches to the woman being led to a MoMo vendor who converts the electronic cash to a physical one.
The commercial explained in visual terms what the mobile money concept was about and how it worked.

Interestingly, Ms Tetteh, who is now 64 and walks with the support of a pair of clutches due to deteriorating health, has since kept the green cloth she shot the commercial in and wears it for special MoMo assignments. 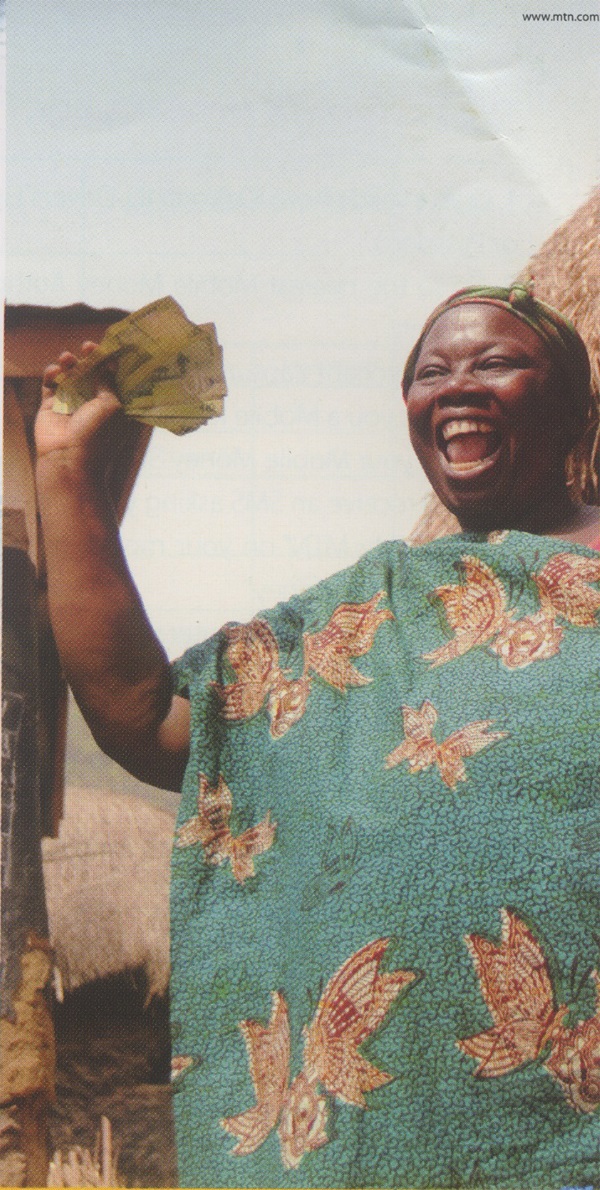 Ms Tetteh, who is now 64 and walks with the support of a pair of clutches due to deteriorating health, has since kept the green cloth she shot the commercial in and wears it for special MoMo assignments

She said even the team at MTN was surprised she had kept the cloth all these years but she explained that it was part of her identity for the brand. On Tuesday when she received the house, she donned that piece of cloth, igniting some nostalgic feelings among guests.

Fulfilling a promise
At the event, the Chief Executive Officer of Mobile Money Ltd, Eli Hini, explained that the house was to express their appreciation to Ms Tetteh for lending the company her image and voice.
“Madam Rita’s role and delivery as well as the entire cast in MoMo’s first ever commercial played a significant role in appealing to the Ghanaian populace. From then, Madam Rita joined us across the length and breadth of the country as we created awareness of the MoMo service.

“In view of the success chalked up over the years, Mobile Money decided to honour all stakeholders who played very critical roles in the MoMo journey during our 10th anniversary celebrations. At a special awards night, plaques and certificates of honour were presented to all stakeholders. However, we chose to handle Madam Rita’s contribution differently by engaging her to find out what will be most precious to her, and she told us she needed a permanent place of abode. 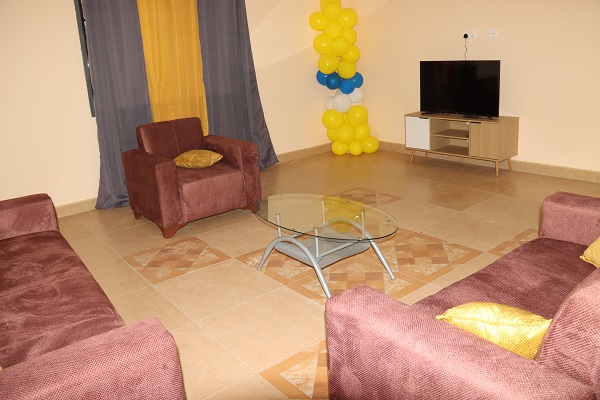 The furnished living room of the two-bedroom house

“Mobile Money Limited decided to honour the request after she sent us the plan of the type of facility she wanted. Today, we are happy to honour our promise and present this two-bedroom house worth over GH¢300,000.00 to her.”

‘Me Nsa aka’ job was ordained by God
In front of the two-bedroom house is an inscription, “Nyame Na ay3,” to wit ‘it is the doing of the Lord.’

Ms Tetteh told The Mirror that she asked the contractor to put the expression there as gratitude to God for the rare gift given to her.

While expressing her gratitude to MTN and Mobile Money Ltd, she said she believed it was God’s will that she played that role. 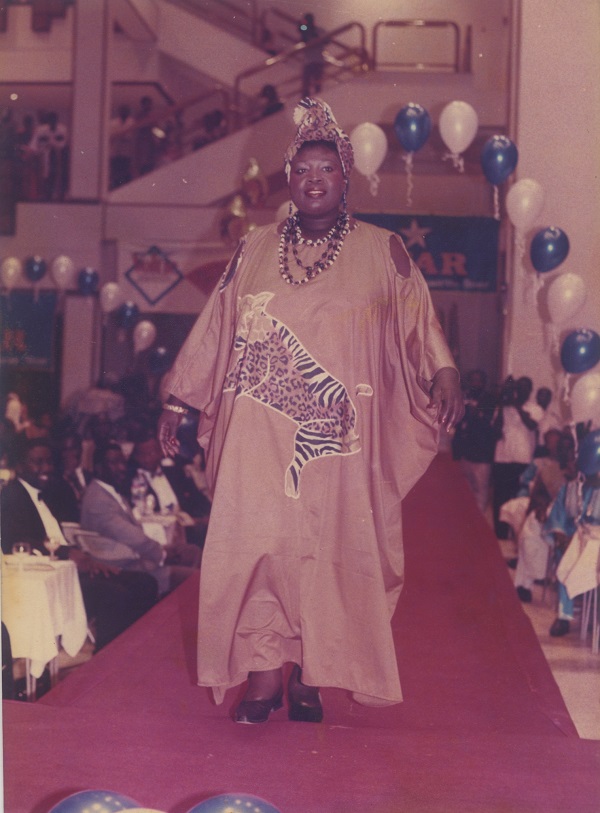 She recounted that prior to shooting the commercial at a small town near Atimpoku in the Eastern Region, her contact person at Origin8, the agency in charge of the production, called her to inform her about an upcoming job but she did not hear from him till one afternoon when she had returned from the Central Business District of Accra to buy goods for her small shop.

“In addition to my acting and commercial gigs, I was a petty trader as well so honestly when he called me that day and requested that we meet immediately at a hotel around the Tetteh-Quarshie Roundabout, I had no cash on me. I had used all my money to buy goods for my shop and was expecting to make sales for the day. I remember my taxi fare was even paid by him. I later realised that they had tried using some other models but they couldn’t meet the standard, that’s why they called me,” she stated. 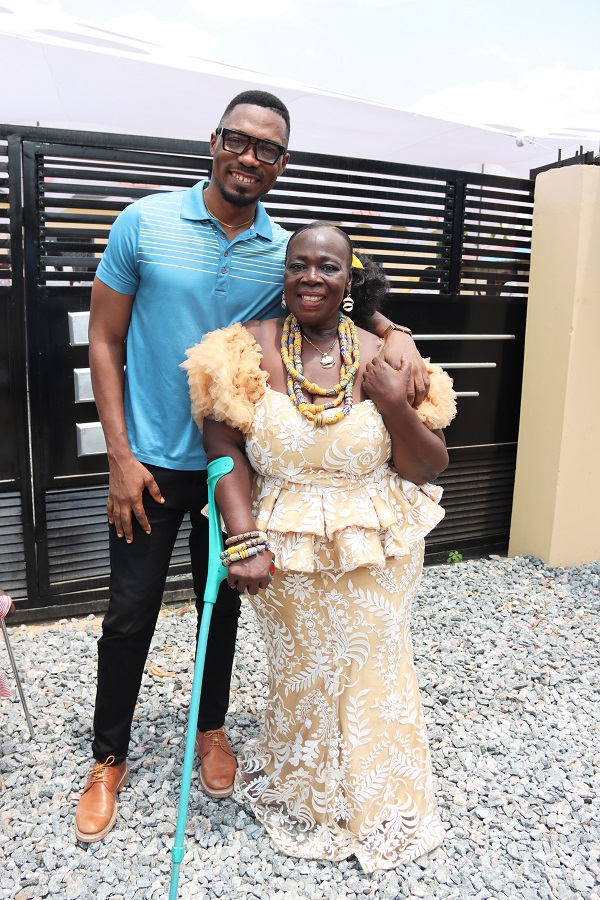 She expressed gratitude to Mr Kel Quao, CEO, Stars Moddeling Agency for connecting her to the origin8 team

Ms Tetteh narrated that when the production team instructed her to meet them at 2:00 a.m. the following dawn, she was sceptical and scared to go as that was then the peak of the serial killing of women in the country.

She eventually gathered courage and met the team and other members of the crew at the scheduled time.
“I won’t lie to you. I was scared when we set off; about four buses and other vehicles ferrying many people at this “ungodly hour”. Aside my contact person, I recognised some other members of the Origin8 team so that calmed me down.” 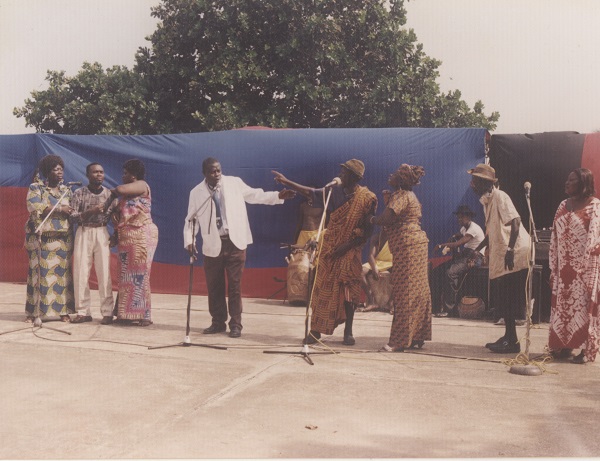 This was also the first time she was working with this agency without a script. The only requirement was if she could run. In her past dealings with them, they gave her scripts weeks before the day of the shoot so she prepared but with this, she was only given the script on location.

“When I recount the incidents preceding the shoot and how the relationship moved from a single gig to a long lasting relationship, I know it was ordained by God. I speak Twi or Akuapem but they wanted Fante; there and then I had to switch,” she said.

She expressed gratitude to the Chief Executive Officer of Stars Modelling Agency, Kel Quao, for connecting her to Origin8; Designer Naa Shika Fantasy and Designer Tetteh Plahar and his brother, Addy Plahar, for the different roles they had played in her career. 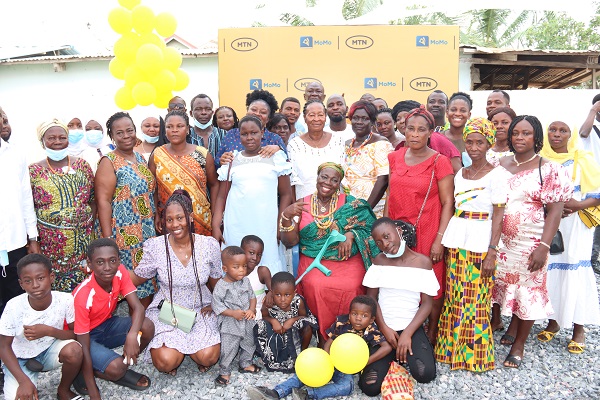 Her friends and family were at the handing over ceremony to share in her joy  Pictures: ELVIS NII NOI DOWUONA

“My journey has been long and winding but God has honoured me through MTN Ghana and for this I am most grateful. It has not been a smooth journey but there is an endless list of people who have supported me and to all of them, I pray God replenishes all they have invested in me,” she said.