Deladem Xonu opens up on his solar dryer machine

Agriculture is touted as the bedrock of the country’s economy and this stems from the fact that it contributes significantly to the country’s economy. The 2021 non-traditional export (NTE) statistics by the Ghana Export Promotion Authority quotes total earnings from the agricultural sub-sector in 2021 to be US$476.01 million compared to US$433.02 million earned in 2020. It said the agricultural sub-sector contributed 14.29 per cent to total NTE earnings in 2021.

The machine dries cassava under hygienic conditions devoid of bacteria and dust within the shortest possible time - approximately between six to eight hours. This allows the dried cassava to be stored for a longer time - between six months to one year. For that reason, farmers are able to sell them when cassava flour is in high demand. This offers farmers the ability to add value to their cassava and make money such that the raw cassava they are unable to sell doesn’t go to waste. They can dry them and sell when cassava flour is in high demand, thereby cutting down on post-harvest losses.

It doesn’t end there, according to him, recognising that Ghana was one of the countries with the highest deforestation rates in Africa and the world, he and his team of five that built the solar dryer, had come out with an innovation that turn the cassava peel into clean smokeless cooking fuel and this is achieved in combination with yam peels and sawdust.
Deladem was the 2021 winner of the Israeli Green Innovation Competition (IGIC) and he was sharing his innovative solution with The Mirror at a media briefing organised by Strategic Communications Africa Limited (Stratcomm Africa) for him and the 2020 winner of the competition.

What is IGIC?
Instituted in 2019 by the Israeli Embassy in Ghana, in collaboration with the Ghana Garden and Flower Movement, which is a Stratcomm Africa initiative, the IGIC seeks to honour individuals and organisations that come up with innovative solutions that promote environmental conservation and agriculture in Ghana.

It focuses on innovative start-ups in the agriculture and horticultural sector which are in line with Israel’s commitment to stimulate both agriculture and innovation in Ghana. The winner of the competition receives a fully paid trip to Israel to participate in industry related meetings, excursions and conferences to learn best practices, to network and to seek potential investors to expand their existing businesses.

Deladem presented his solar dryer machine for the competition and he eventually emerged the winner. He and the 2020 winner, Jeffrey Boakye Appiagyei, could not travel to Israel due to the COVID-19 pandemic and its associated travel restrictions. They had the opportunity to do so recently and the press briefing was for them to share information about their experiences on the trip.

The solar dryer machine
Giving more details about the innovation, Deladem, who hails from the Volta Region, said the machine used sun and polyethylene materials of a certain quality to trap sun and contain it in an enclosed space such that it hastened the process of drying the food that had been placed into it under very hygienic conditions devoid of bacteria.

He said the solar dryers were built with no technical expertise, explaining that he was a computer scientist while his other colleagues were not artisans. However, because they were ready to provide a solution, they learnt how to build the solar dryers by themselves. His team members are James, Edem, Selorm and Sunday.

So far, he said they had been able to build five of the machines – two had been stationed at two communities in the Eastern Region, namely Akotikrom in the Birim South Municipality and Apeguso. The remaining three were at the place they built them.
Apart from cassava, Deladem’s solar dryer machine is also able to dry rice, beans, cereals, fruits and mangoes but cassava is the main focus.

Why cassava?
Deladem explained that he chose cassava because it was one of the main crops in the country and that losses in that sector was an indication that the country was not doing well. 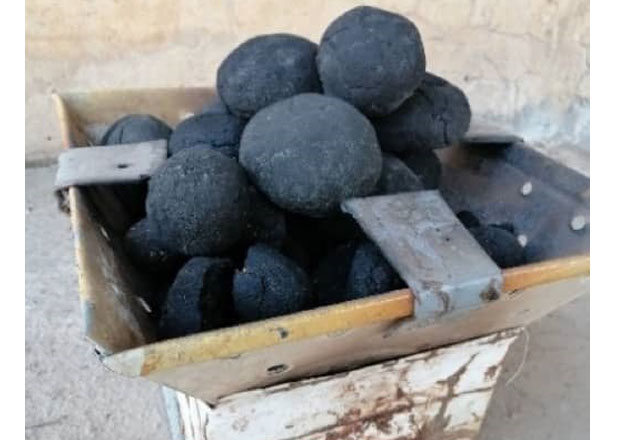 Besides, he explained, cassava had a very short lifespan and that was worsened by the challenge of farmers not getting quick access to markets and the non-availability of a ready market that would purchase all the cassava at the same time.

“Anytime we hear of cassava, konkonte comes to mind and the experience we have with konkonte is that the cassava is dried under unhygienic conditions and unfavourable environments so it attracts a lot of dust and also takes a very long time to dry. Our solution was basically to help these farmers to dry their cassava within a short space of time within the approved standard by the Ghana Standards Authority,” Deladem explained.

Passion for green
Deladem studied computer science at the University for Development Studies (UDS), Navrongo Campus, for his first degree with the intention to go into database administration.
However, his desire to bring a solution to some kind of problem challenged him to go into the building of the solar drying machines which he started a few years ago before entering for the competition.

The competition and the Israel experience
He described the competition as a big platform for great startups that were within the green space. He said it was a journalist friend who informed him about the competition, adding that winning it and going to Israel had been a eye-opener to him because it had helped him to realise how far he could go.

He said he was able to meet potential investors and institutions that were doing something similar to what he had done.

Work experience
Deladem is an associate youth trainer with Global Platforms, a training hub of Actionaid Ghana. Deladem is a climate change advocate who has been training young people in various communities on climate change and has done a lot of community volunteerism. He has also worked as a team manager and looked to build a career in football administration sometime soon after he’s able to scale up his enterprise and operate it smoothly.

Education
Aside from his first degree from the UDS, he holds a Diploma in Business Computing from the Kofi Annan Centre of Excellence in ICT and is a former student of Krachi Senior High School, St Charles Lwanga Catholic School, Abeka, and holds an office user certificate from IPMC.

Advise
Deladem advised young people to apply for the IGIC and put in their best when they apply because they never know where winning the competition will take them.
He said they should also not sit on the various innovative ideas that they had but initiate them to attract support from people.