Why does the peacock raise his feathers?

BY: Junior Graphic
Category: Tell Us Why 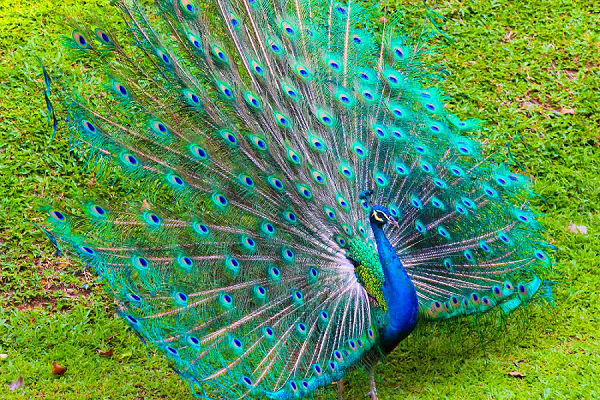 The peacock displaying its feathers and strutting around
30.5k Shares

One of the most spectacular sights presented by any bird is that of the peacock displaying his feathers.

As you might imagine, such a sight has always impressed people. In fact, in ancient times, both the Greeks and the Romans considered the peacock to be a sacred bird. But this didn’t prevent the Romans from serving peacocks for dinner!

The peacock is a native of Asia and the East Indies, from which it has been brought to other parts of the world.

There are only two species of peacock, and they are related to the pheasant.

Because of the way the peacock displays his feathers and struts around, a common expression has arisen: “Vain as a peacock.” Actually, this is quite unfair to the peacock. It is no more vain than many other birds during the mating season.

The male peacock’s display of gorgeous plumage is for the sake of the hen and for her alone. Among birds, as you know, it is the male who usually has the brighter colours and more “flashy” appearance. The peacock happens to have more marvelous colours than any other birds.

His head, neck, and breast are a rich purple, splashed with tints of green and gold. His head is also set off with a crest of 24 feathers in paler hues. His back is green, with the wing feathers tipped with copper.

The most remarkable feature of the male peacock of course is the train, or extension of his tail. A peacock is about seven or eight feet long, of which the tail takes up between three or four feet.

The tail is a medley of blue,   green and gold. Here and there in the regular pattern are “eyes” which change colours. The train is raised and held up by the stiff quills of the shorter, true tail.

The female peacock, that is the peahen, is slightly smaller and quieter in tone. She has no train, and only a short crest of dull colour. She usually lays 10 eggs, of a dirty-brown colour. Peacocks are generally kept for ornaments and for the sake of their plumage.