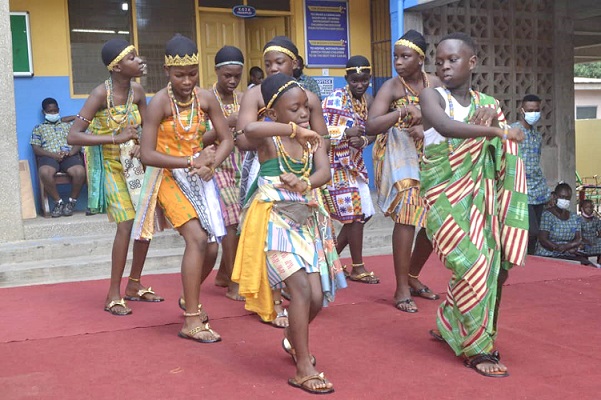 • Some of the pupils dancing to entertain guests.

Class Six pupils of Ideel Community School, Anyaa, Accra, displayed their talents during an arts exhibition organised for the  school.

The exhibition, which was on the theme, ‘Our environment’, was in two parts - visual arts and performing arts.

For the visual arts display, the pupils entertained the school and guests with things that depicted traditional culture and modern day life while for the performing arts, they put up a drama, dance and music performances.

As part of the programme, there was a drawing competition which saw the pupils draw the portraits of the Proprietress of the school, Ms Lucil Otoo, and the guest of honour for the programme, Ms Carol Annang, who is  the Country Director of Invest in Africa.

The Class Six teacher of the school, Mr Emmanuel Coleman Andoh, explained that the programme was meant to educate pupils about culture and the influence of arts on culture.