Climate change: Household rubbish to be turned into jet fuel 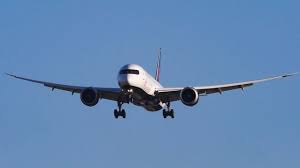 Waste gases from a steelworks and household rubbish could be used to fuel aeroplanes for "guilt-free flying".

It comes as five projects have been awarded a share of a £165m government fund.

The projects will cut CO2 emissions by an average of 200,000 tonnes a year, once fully up and running.

The Department of Transport said the project will also produce 300,000 tonnes of sustainable aviation fuel a year.

One of the projects will be based at Port Talbot steelworks and will convert steel mill off-gases into fuel.

Another scheme will develop a plant creating duel using carbon captured from a gas-fired power station and hydrogen made from renewable electricity.

The other successful projects include sustainable fuel plants in Teesside, Immingham and Ellesmere Port, which will cover domestic and commercial waste.

UK government Transport Secretary Mark Harper said: "Using waste or by-products to refuel airliners sounds like a flight of fancy, but... it's going to help us make guilt-free flying a reality.

"It's exactly this kind of innovation that will help us create thousands of green jobs across the country and slash our carbon emissions."