Zimbabwe: Mugabe to get $10m payoff and immunity for his family 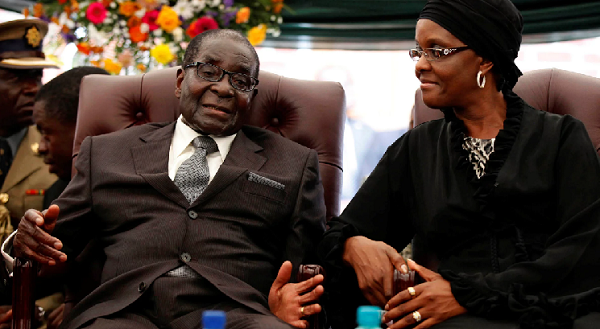 Robert Mugabe and his wife Grace will have their family assets safeguarded.
30.5k Shares

Robert Mugabe and his wife will receive a “golden handshake” worth many millions of dollars as part of a deal negotiated before the resignation of the ageing autocrat last week. The exact sums to be paid to the former president and his wife Grace are still unclear, though one senior ruling party official with direct knowledge of the agreement said the total would not be less than $10m.

The official said that Mugabe, who has been granted immunity from prosecution and a guarantee that no action will be taken against his family’s extensive business interests, would receive a “cash payment of $5m” immediately, with more paid in coming months.

The 93-year-old’s $150,000 salary will also be paid until his death. The 52-year-old first lady, reviled for her extravagance and greed, will then receive half that amount for the rest of her life.

Mugabe’s 37-year rule left Zimbabwe with a worthless currency, massive debts, an impoverished population and an estimated unemployment rate of more than 80%. Roads are rutted, many rural communities have no electricity, education is basic and healthcare almost non-existent. A life expectancy of 60 is one of the lowest in the world.

The first couple will be able to remain in their sprawling mansion known as the Blue Roof, in Harare. The state will pay for their medical care, domestic staff, security and foreign travel.

A second official defended the agreement, made early last week after protracted negotiations between senior politicians close to the new president, Emmerson Mnangagwa, and representatives of Mugabe. Mnangagwa was sworn in on Friday in a colourful ceremony before tens of thousands of people in Harare’s main stadium. The 75-year-old stalwart of the ruling Zanu-PF party promised a new era for his country, and said that he would govern for “all Zimbabweans”.

Opposition politicians have criticised the agreement with the former president. “We are not privy to any deal reached with Mugabe, and if there is any deal on money or anything else it is unconstitutional,” said Douglas Mwonzora, secretary general of the Movement for Democratic Change, the main opposition party.

“In terms of the constitution Mugabe is a retired president and does not have immunity to criminal or civil wrongdoing committed while in office. In Zanu-PF, they can grant each other immunity, but the law does not authorise that.”

Themba Mliswa, an independent MP, said “there was no country which would like to see a former president in a state of poverty”, but that leaders must understand they were accountable. “There must be a good precedent. You can’t see a president come in looking to loot and plunder and thinking he will be allowed to keep it,” Mliswa said.

Grace Mugabe was called “Gucci Grace” in Zimbabwe for her lavish spending. The former secretary, who married the president in 1996, recently bought millions of dollars worth of property and luxury cars in South Africa. Her eldest son, 25-year-old Bellarmine Chatunga, recently enraged Zimbabweans by posting a clip on social media taken in a well-known Johannesburg nightclub showing him pouring a £200 bottle of champagne over a £45,000 watch on a night out in South Africa, boasting that “daddy runs the whole country”.

The deal also extends to the Mugabes’ wide business interests, which include a series of dairy farms, and those of his extended family. “None of this will be [seized] or in any way molested,” said the official involved in the negotiations. The difficulties of drawing up a list of the many assets to be covered by the agreement contributed to the delay in Mugabe’s resignation, which had been widely expected as early as last Sunday, he said.

Grace Mugabe’s oldest son, Russell Goreraza, 33, from her first marriage, is reported to have a substantial stake in Zimbabwe’s lucrative mining industry. He imported two Rolls-Royce limousines in September.

One relative of Mugabe confirmed on Saturday that he was “covered” by the deal and that he would not be leaving Zimbabwe. “I was worried about what the changes would mean for me personally … but I am now reassured that I can live on in my country,” said the relative, who lives in Harare and has a large farm in western Zimbabwe.

Mnangagwa, who was a loyal aide of Robert Mugabe for decades, has urged the country’s citizens not to undertake any form of “vengeful retribution” and in his inaugural speech praised the “immense contribution” made by the former president.

Though there is still much residual respect for Mugabe, based on his record as a leader in Zimbabwe’s wars of liberation in the 1960s and 1970s, there is little affection for his wife.

It was her bid to succeed her husband that triggered the events leading to his overthrow. The first lady and prominent members of her G40 faction engineered the firing of Mnangagwa as vice-president. The army then took over to allow the former spy chief to return to Zimbabwe to take power.

Those not covered by the deal with the Mugabes may face harsh punishment for picking the wrong side. The former finance minister Ignatius Chombo who was among those detained by the military when it seized power, appeared in court on Saturday to face corruption charges.

Chombo’s lawyer, Lovemore Madhuku, had said that his client was admitted to hospital on Friday with injuries sustained from beatings he received while in military custody. Chombo is accused of having stolen $3.6m.

An early indication of Mnangagwa’s style of government will come with his selection of a new cabinet, possibly as early as Sunday.

There are widespread hopes – not least among western diplomats – that officials from the MDC and other opposition parties will be included in the new government.

Mnangagwa has also pledged to respect the constitution and hold elections by next August. “The people’s voice will be heard,” he told the jubilant crowd of tens of thousands who packed the Harare stadium.