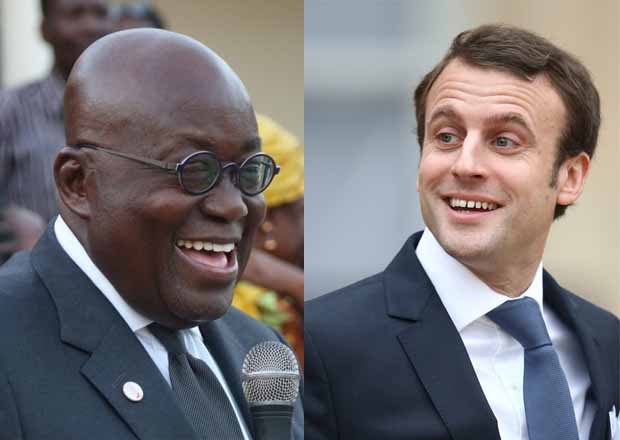 French President Emmanuel Macron starts his first tour of Africa on Monday. He is to visit Ghana, Burkina Faso and Côte d'Ivoire in an effort to revitalise France's image on the continent.

Macron's advisers say he hopes to modernise France's relations with Africa by emphasising business links, education and sport rather than development aid.

This summer the French president set up a committee to advise him on Africa policy.

It is made up primarily of young businesspeople with dual nationality and close connections with their country of origin.


As well as countering hostility to France's influence over its former colonies, which is particularly strong among young people, Macron also has to bury the memory of his controversial remark at a G20 meeting that Africa has "civilisational" problems, among them African women having "seven or eight children".

It will be recalled that Mr Macron after his inauguration last May visited Gao, Mali in what was his second foreign trip after Germany.

During the visit he said French troops would remain "until the day there is no more Islamic terrorism in the region".

Later in July, Mr Macron returned to Mali where he joined West African presidents to launch a new multinational military force to tackle Islamist militants in the Sahel.

He told a regional summit the force should be fully operational by the autumn despite its current budget shortfall.

Some observers see the initiative of the G5 Sahel bloc - Mali, Mauritania, Burkina Faso, Niger and Chad - as forming the basis of an eventual exit strategy for around 4,000 French troops now deployed to the volatile region. But Macron said Paris had no plans to withdraw them.

However, his latest trip will see him visit three countries before returning to his native France.

In Burkina Faso on Tuesday the French president will deliver a speech on his Africa policy in front of 800 students at Ouagadougou University - a challenge, given that many Burkinabé resent the fact that France helped former president Blaise Compaoré flee to Côte d'Ivoire when he was toppled by massive demonstrations.

Burkina is also demanding the extradition of Compaoré's brother, François, in a case relating to the death of a journalist in 1998.

Several organisations have called a demonstration during Macron's visit to protest at the "plundering" of the country's natural resources by French companies, French military presence and the continued existence of the CFA franc, which they claim is a "colonial currency".

In the Côte d'Ivoire capital, Abidjan, he will attend a Europe-Africa summit where he hopes to link relations with Africa to his plans for European Union reform.

Macron is pushing for European countries to support the G5 African military force in the Sahel and coordinate efforts to stop people smuggling from countries such as Libya.

He will also lay the foundation stone of the Abidjan metro, a project being undertaken by French-Korean consortium Bouygues-Dongsan and supported by a 1.4 billion-euro French loan.

His final destination, Ghana, is a former British colony, not a French one, a sign that he has a "continental approach to Africa", according to his advisers.