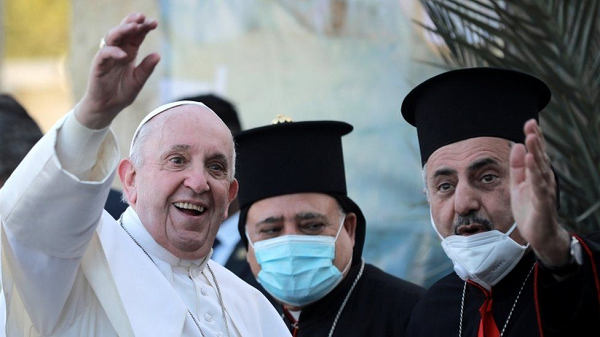 The Pope is due to say Mass in a Baghdad church
30.5k Shares

Pope Francis has called for an end to violence and extremism, on the first ever papal visit to Iraq.

The pontiff is making his first international trip since the start of the coronavirus pandemic.

Covid and security fears have made this his riskiest visit yet, but the 84-year-old insisted he was "duty bound".

He also said Iraq's dwindling Christian community should have a more prominent role as citizens with full rights, freedoms and responsibilities.

He is hoping to foster inter-religious dialogue - meeting Iraq's most revered Shia Muslim cleric - and will celebrate Mass at a stadium in Irbil in the north.

About 10,000 Iraqi Security Forces personnel are being deployed to protect the Pope, while round-the-clock curfews are also being imposed to limit the spread of Covid.

Iraq's PM Mustafa al-Kadhimi greeted him at the airport, with a red carpet, Iraqis in national dress and songs from a largely unmasked choir.

Hundreds of people lined the airport road as the Pope's convoy, heavily chaperoned by police motorcycles, left for the city.

But the Pope was seen to have a pronounced limp, suggesting that his sciatica condition continues to bother him.

'Rich Christian heritage'
In a speech after being welcomed by Iraqi President Barham Salih, Pope Francis said he was very pleased to come to Iraq, which he described as the "cradle of civilisation".

"May the clash of arms be silenced... may there be an end to acts of violence and extremism, factions and intolerance!" he said.

"Iraq has suffered the disastrous effects of wars, the scourge of terrorism and sectarian conflicts often grounded in a fundamentalism incapable of accepting the peaceful coexistence of different ethnic and religious groups."

He turned to the country's Christians, who he said should have a greater role in public life.

"The age-old presence of Christians in this land, and their contributions to the life of the nation, constitute a rich heritage that they wish to continue to place at the service of all," he said.

He said Iraq's diversity was a "precious resource on which to draw, not an obstacle to eliminate".

Pope Francis later went to hold Mass in Baghdad's Syriac Catholic church of Our Lady of Salvation, targeted in an attack in 2010 by jihadists which left 52 Christians and police dead.