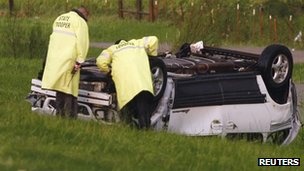 A new series of tornadoes has swept through the US state of Oklahoma, killing at least five people, including a mother and child, officials say.
The tornadoes struck near the Oklahoma City suburb of Moore, where 24 people were killed by a violent tornado nearly two weeks ago.

A police spokeswoman said the mother and child who died were in their car on a major highway - Interstate 40 - near Oklahoma City.

Dozens of lorries were overturned on the highway.

Amy Elliott, a spokeswoman for Oklahoma's Office of the Chief Medical Examiner, said that two of the deaths occurred in Union City and one was in El Reno, west of Oklahoma City.

Dozens of people have been hurt, with five of them in a critical condition.

Among those who took to the roads to flee the storm was 30-year-old Brandi Vanalphen.

"What got me scared was being stuck in traffic with sirens going off," she said.

Oklahoma City Mayor Mick Cornett said: "For reasons that are not clear to me, more people took to the roads, more than we expected. Everyone acted differently in this storm, and as a result, it created an extremely dangerous situation.

"I think we are still a little shaken by what happened in Moore. We are still burying children and victims, so our emotions are still strong," he added.

Meteorologists said the tornadoes were less severe than those that struck in May.

Oklahoma is in part of the US Midwest known as Tornado Alley. Some 1,200 tornadoes strike each year, though most are relatively small.