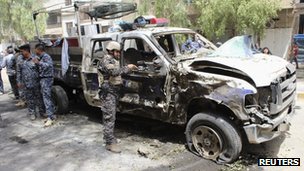 The United Nations says more than 1,000 people were killed in Iraq in May, the highest monthly death toll for years.
The violence makes it the deadliest month since the wide sectarian violence of 2006-7, and raising concern that the country is returning to civil war.

The vast majority of the casualties were civilians, and Baghdad was the worst hit area of the country.

Martin Kobler, UN envoy to Iraq, called it a "sad record" and urged politicians to act to stop the bloodshed.

Multiple bombings have ripped through Shia and Sunni neighbourhoods across the country over the past few months.

Figures released on Saturday showed 1,045 civilians and security personnel were killed in May, far higher than the 712 who died in April, the worst recorded toll since June 2008.

On Thursday, Mr Kobler warned that "systemic violence is ready to explode at any moment if all Iraqi leaders do not engage immediately to pull the country out of this mayhem".

Analysts say al-Qaeda and Sunni Islamist insurgents have been invigorated by the Sunni-led revolt in neighbouring Syria and by the worsening sectarian tensions in the country.

The BBC's Rami Ruhayem, in Baghdad, says the violence has been linked to a stand-off between the Sunni minority against the Shia-dominated order installed following the US-led invasion 10 years ago.

But the attacks seem to tell a different story, our correspondent says.

Outside of Baghdad, predominantly Sunni areas were badly hit.

On some days, Shia areas across Baghdad appear to have been the main target, while on others, the Sunni areas outside the capital saw most explosions.

One explanation is that Sunni militant groups linked to al-Qaeda want to provoke civil war in Baghdad and undermine the government in areas they see as their strongholds, our correspondent says.

But other explanations link the violence to the civil war in neighbouring Syria, he adds.

The bloodshed has been accompanied by unconfirmed rumours about sectarian militias roaming Baghdad for revenge, which have caused fear in many areas of the capital.

The violence has prompted many initiatives aimed at stopping any slide into civil war, including appeals by clerics and grassroots tribal campaigns.