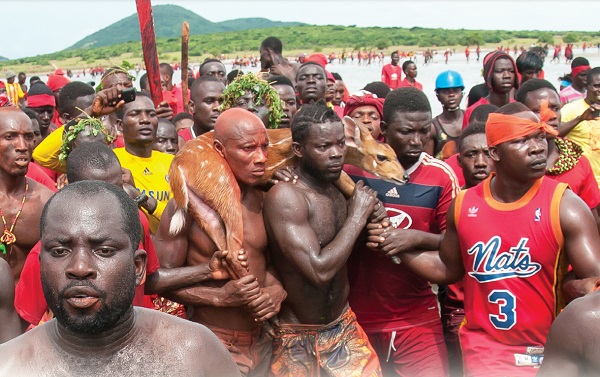 ABOAKYIR is a deer hunt festival celebrated by the Effutu people of Winneba in the Central Region.

History of the festival

Aboakyir derives its origin from an ancient rite where sacrifices are traditionally offered to the god Otu in order to remove evil and predict a good harvest.

It is said that the people from the ancient Western Sudan Empire migrated south, and settled in Simpa, now Winneba.

To celebrate this, the priest instructed them on behalf of their god, to offer a young member of the royal family every year as a sacrifice.

The people appealed against this, and the substitution of a wild cat was accepted as a sacrificial offering, provided it was caught alive and beheaded before the god.

However, so many lives were lost in attempting to capture the wild cat, that they appealed a second time to Penkyi Otu, named after the place the people settled, and it accepted the offering of a young deer.

Aboakyir festival is celebrated on the first Saturday in May annually.

It is a week-long of activities which is climaxed on the Saturday with a colourful procession and a durbar of the chiefs and people of the Effutu Traditional Area.

Two traditional warrior groups — the Tuafo Number One and Dentsefo ‘Asafo’ groups, move to their respective hunting grounds at dawn of the Saturday, wielding sticks and clubs amid chanting of war songs.

The first Asafo company to bring the live deer to the Omanhen (Paramount Chiefs is declared the winner of the year.Failure to catch a deer is considered to be a bad omen, hence each Asafo group expects the other to make a catch.

When a catch is made, a message is sent to the chiefs and people in town within minutes which sets them into wild jubilation.

In the afternoon after the durbar, there is a massive procession through the principal streets of the town led by the victorious Asafo group followed by the chiefs in rich regalia amid singing, drumming and dancing.