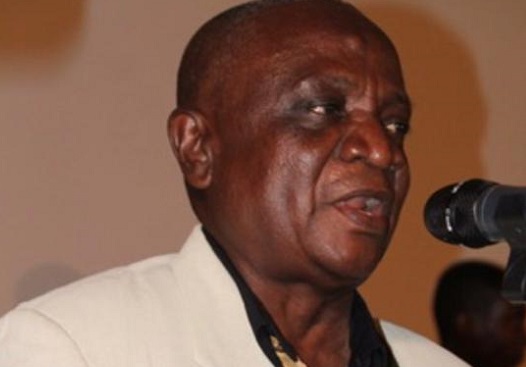 THE news of the death of one of Ghana’s celebrated Highlife artistes, the legendary Nana Kwame Ampadu, might have shocked many people but for many artistes who were influenced by his works, it is a big blow.

The Oman Bo Adwo singer passed away in the early hours of Tuesday, September 28 at the Legon Hospital in Accra where he had been receiving treatment since last year. He was 76 years old.

Since the news broke, tributes have been pouring in for the talented musician who is credited for his contribution to the Ghanaian music industry.

A number of Highlife artistes who spoke with Graphic Showbiz described Nana Ampadu, a native of Obo-Kwahu in the Eastern Region, as a strong influence on an entire generation.

Dada Hafco stated that Nana Kwame Ampadu’s career, spanning over four decades, was a guide for younger artistes like himself.

“There is only one Nana Ampadu and for me I can only say that the biggest of all the trees has fallen. My music is greatly influenced by his style of using proverbs and storytelling in his song. I’ve always looked up to him and we thank God for blessing us with such a gift,” he said.

Describing her bond with Nana Ampadu as one of a “father and daughter” relationship, Akosua Adjepong mentioned that her music and skills were honed by the late musician.

“My dad died when I was young so I took Nana Ampadu as my father and he shaped me in so many ways. My songwriting skills became better because of him. He took me to my first TV interview at GTV and was my guide and counsellor. I have known him for the past 35 years and the best description of him is that he was a father to all,” she said.

Sharing his fond memories of Nana Ampadu, the Acting President of the Musicians Union of Ghana(MUSIGA), Bessa Simons stated that Nana Ampadu was a selfless man who always loved to share.

“I have known him for more than two decades and I can say that he was one of the best songwriters and composers. He loved Ghana and used every least opportunity to promote the motherland. We have lost more than a legend who always advised us through his songs,” he said.

In the words of Quarmy Zaggy, “Highlife music is in grief” following the death of Nana Kwame Ampadu.

“It’s unfortunate that we are losing our Highlife gems and now Nana Kwame Ampadu has departed. He touched millions with his talent and was happy to chart a good cause for young artistes like myself,” he stated.

Trumpeter Berima Amo said, “Nana Ampadu was a strict disciplinarian and took his craft very seriously. He believed it must be done well and taught me a lot about Highlife music. I'm so grateful that he lived this long for me to sit with him one-on-one. If he were of another nationality, he would have a statue made in his memory. He is the greatest songwriter Ghana has ever produced.”

In a Facebook post, Rex Omar thanked Nana Ampadu for paving the way for his successors. “You paved the way for us and really paid your dues. Damirifa due Odwontofohene Nana Kwame Ampadu, Live in power,” he wrote.

“Nana Kwame Ampadu's legacy remains a measuring rod for the quality of sound and lyrical contents of Highlife music being composed and played today. For us members of Lovers of Highlife Ghana, the demise of Nana Kwame Ampadu leaves a vacuum in the music industry,” he stated.

Profile
A former General Secretary of the Musicians Union of Ghana (MUSIGA), Nana Kwame Ampadu born Patrick Kwame Ampadu was the founder of the famous African Brothers Band, and rose to national prominence in 1967 with his song Ebi Te Yie.

Ampadu’s career saw him travel around the world and in 2015, the he was honoured with a Lifetime Achievement Award at the 16th Vodafone Ghana Music Awards. In 2017, he was among five Highlife artistes honoured at the MUSIGA Grand Ball where he received a plaque and a cash prize.