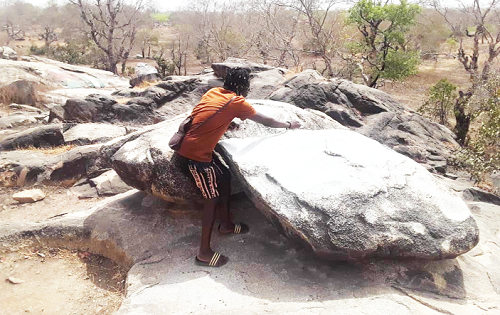 Mr Azumah trying to strike the huge rocks at the entertainment centre with stones to produce various sounds. This is where the slaves danced and sang to entertain themselves
30.5k Shares

The Pikworo Slave Camp is one of the many significant and interesting tourist attractions in the Upper East Region that have over the years received many foreign tourists, particularly Blacks from the Diaspora.

Located at Paga Nania, about three kilometers west of Paga in the Kassena Nankana West District of the region, the camp was founded in 1704.

It was originally developed as a slave transit point where slaves were auctioned and later resold in the Salaga Slave Market in the then Northern Region.

Mr Aaron Azumah, the Manager of the camp, revealed to the Daily Graphic during a tour of the site that it was discovered by Bagao, one of the three slave masters or raiders as a holding place for slaves brought down from the northern part of Africa.

The slaves were forced to continue their journey for about 150 kilometers south to the slave market at Salaga and then to Bono Manso in the Bono East Region, Assin Manso, Cape Coast and finally to the Elmina Castle, all in the Central Region before shipment to European or Western Countries.

Mr Azumah indicated that the other slave masters were Babatu and Samori Toure.

The camp is endowed with rocks and trees where the slaves were tied with chains. History has it that about 200 slaves were brought to the camp at any given time.

The first port of call for slaves at the camp was where they were chained to the trees and then made to walk uphill for food and water.

While narrating what happened centuries ago, Mr Azumah pointed at an area on a hill where an oval shaped shallow hole had been created within the rocks.

These holes were used as bowls from which the slaves ate.

The eating period was used as a testing ground or an assessment area by the slave masters to find out which of the slaves could endure hardship and survive.

The holes were created with stones by some of the slaves themselves who according to Mr Azumah were punished by their slave masters for either trying to escape or for being “stubborn and disobedient".

Around the eating place, the manager also showed this reporter a crevice within a rock where water had been oozing out for centuries even in the dry season, for slaves to drink water from after taking their meals.

There was also a grinding area, where the female slaves were made to grind grains and ingredients for the preparation of the meals. While grinding, the females usually sang inspirational songs to give them hope and not to be sorrowful for what they were going through or were about to go through in the future.

The camp manager, while demonstrating the act around two huge rocks with flat surfaces and using a stone to grind the surfaces, re-enacted how the female slaves felt years ago.

The slave masters made the slaves entertain themselves. Further uphill at the camp, Mr Azumah pointed at an area where there were two huge rocks that were used as drums with some stones on their flat surfaces.

Striking the stones on different parts of the flat surfaces of those rocks produced various sounds to which the slaves sang and danced. While the slaves performed the act, they sang various traditional tunes to depict their culture and ethnic background.

They were allowed to move freely without being chained while drumming and dancing but they were cautioned not to try to escape because while the entertainment was going on, their slave masters had guards standing with their wooden guns to shoot any slave who tried to escape.

Another key area at the camp was described as a meeting place for slaves where a roll call was usually conducted before merchants were called in to buy the slaves and send them to the Salaga Slave Market.

Here also Mr Azumah re-enacted what happened to slaves that refused to be sold out to the merchants. They were made to lie down on a rock with both their hands and legs tied and flogged until they agreed to go with the merchants.

Even before that difficult journey began for a slave, he or she was allowed to take the last meal at a portion around the meeting place on the rocks with oval shaped holes.

Another area at the camp designated as more or less a security post was where security guards stood on top of many high rocks with their weapons overlooking the whole camp to ensure that no slave tried to escape.

The camp also featured the slave cemetery and punishment rock where slaves who tried to escape were placed naked on that rock in the sun without food or water as punishment.

The Pikworo Slave Camp, therefore, served as a slave collection outpost by Ghanaian traders who sold slaves to the French, the English and the Dutch. These slaves would be housed until it was time to transport them to the Southern Coast for Trans-Atlantic sale.

The journey could take two to three months on foot with no footwear, with slaves being almost naked while traveling through different weather conditions while the slave masters rode on horses.

The camp itself leaves little evidence of its rich history at first sight but when guided by Mr Azumah, what happened in the past usually becomes clearer to tourists and visitors.

How the name Pikworo evolved

Various historical accounts explain how the name Pikworo evolved and what is now known as the Pwikoro Slave Camp.

An oral account provided by Gabriel Kugoriama of the Nania Community indicated that in the year 1704, the institution of slavery hit the community of Nania and then extended to the town of Paga in the Upper East Region of Ghana, neighbouring countries such as Burkina Faso, and on to other sub-Saharan African countries.

The Nania community is a farming community. Residents of Nania lived as extended families in their compound houses. At that time, the community wasn’t aware of chattel slavery. It was part of their culture that if you needed someone to help in work, you ask an elder of a household, and a person would be given for help. That person was free to return to his or her family after the task or mission was completed.

One morning, the people woke up to see a stranger among them. They asked for his personal details but each time, he provided contradictory information. The people then named him Bagao, meaning “a Bush Man.” Bagao then asked for land to settle and live with the people.

He requested to stay at a place called Pikworo. Pikworo means a “place surrounded by rocks.” The site also had a lot of trees and grass, making the area bushy. After he was granted permission to stay at Pikworo, he invited two of his friends to join him there. Their names where Babatu Zato and Samori Toure. Toure was from Burkina Faso, a Moushi by tribe. Babatu Zato came from Mali, a Wangara by tribe.

Bagao, Babatu, and Samori started to trade in local products made by the community. They later began to capture members of the community (human trafficking). They came with all kinds of materials that they needed to execute this process.

It is believed these raiders did not know that there were already existing community helpers. These three raiders secretly kidnapped many community people and took them to Pikworo. Each day, people in the community searched for their missing family members. It took a very long time before people understood what was going on.

The chiefs told them to use a better approach to take the people. So then, the raiders visited from house to house seeking energetic people.

The raiders took the selected people to the Pikworo camp. Once there, the people were held captive and chained against trees. There was lack of infrastructure and food. The community members, including the chiefs, did not know that their family members that were allegedly kidnapped were being maltreated at the Pikworo camp.

“Our captured family members suffered a lot at the Pikworo camp before being sent to the dungeons of the castles located along the coast. As they took their exit of the Pikworo Slave Camp, they were kept in chains attached to each other for easy control.”

“They moved from the Pikworo camp to the Salaga Slave Market, to Assin Manso (also known as Slaves River or The Last Bath), and then to the castle dungeons along the coast. All in chains, some died along the way. Our family members who survived the transport were then shipped to foreign lands,” Mr Azumah said.