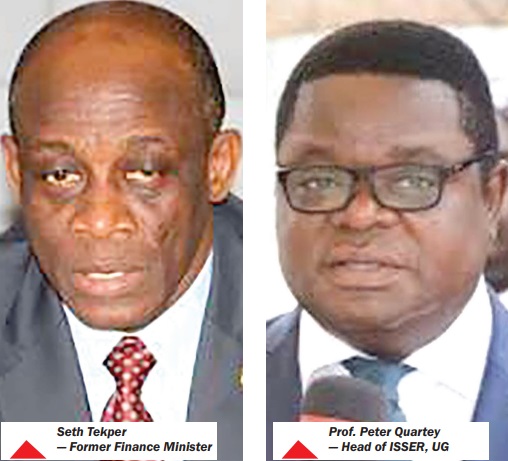 The Director of the Institute of Statistical, Social and Economic Research (ISSER) of the University of Ghana, Prof. Peter Quartey, has called on the government to use the 2022 mid-year budget to review the Electronic Transfer Levy (E-Levy) to make it cheaper for more Ghanaians to contribute to it.

In an interview ahead of Monday’s mid-year review, the Economics professor said a revised collection rate from 1.5 per cent to 0.5 per cent, intensified education and accompanying measures would encourage compliance, and narrow the revenue generation gap recorded in the first quarter of the year.

He explained that most Ghanaians were evading the levy because of the high rate, limited education and loopholes associated with the structure of the levy.

In another interview, a former Minister of Finance, Seth Terkper, called for bold revisions to the 2022 targets to help to inspire market confidence and soften the ground for an economic programme with the International Monetary Fund (IMF).

Mr Terkper said the mid-year budget review must also be used to psyche up and prepare the citizenry towards an IMF bailout which, he said, would be dominated by belt-tightening measures, especially in the first years.

The former member of staff of the IMF mentioned steep cuts in revenue and expenditure targets as some of the things needed to signal to the IMF that the country was ready to take the needed decisions to restore fiscal discipline.

Prof. Quartey said a cheaper and well-structured E-Levy would rope in more people who had to pay but were not doing so.

“The E-Levy rate should be reviewed downwards and education intensified to get more Ghanaians to pay the tax so that we can shore up our revenue and block the loopholes,” he said.

“At the rate of 1.5 per cent, people are not using it because it is too expensive, and so we need to make it very cheap for people to contribute,” the Director of ISSER pointed out.

The midyear budget is expected to outline renewed efforts to inject stability and growth into the economy for the rest of the year.

This is after the initial fiscal policy measures in the 2022 budget failed to generate the needed revenues to finance the transformational projects.

The measures were expected to help generate about GH¢100.52 billion by the end of the year, but the first quarter results which had been released indicated that GH¢16.71 billion had been raised, less than a quarter of the projected revenues, according to data from the Ministry of Finance.

Although it is a requirement under Section 28 of the Public Financial Management Act (PFMA), 2016 (Act 921), this year’s mid-year budget review has attracted special interest over the expected policy measures that can address the current economic woes.

Prof. Quartey said the mid-year budget should be able to introduce a clear strategy that could reduce the debt stock to sustainable levels, stressing that the current debt stock was unsustainable and so measures to slow its growth must be prioritised.

“We expect clear strategies that will reduce the country’s debt level in the medium term (next four years),” he said.

Prof. Quartey said the government promised to cut down on expenditure by reducing the salaries of public sector employees by 30 per cent.

He said there was the need for the country to be informed on the impact of the expenditure cuts in March this year as part of measures to address the current economic challenges.

“For me, these are the main critical things I want to see in the mid-year budget,” he said.

Prof. Quartey, however, expected revenue to pick up in the second and third quarters of the year.

For his part, Mr Terkper said a realistic revision to the budget would be shocking to the system and the populace, but added that it was necessary to regain confidence.

Making a case for the revisions, the finance and tax expert, who was the Finance Minister when the country entered into its most recent IMF programme, the $918-million extended credit facility (ECF), in April 2015, said evidence abounded that revenue targets were over-ambitious, and that if they were maintained, it would lead to huge misses that could worsen the confidence issue.

“While a realistic and more transparent adjustment will be depressing, even shocking, to many, it will inspire market confidence and improve the chances for fast-tracking the IMF negotiations,” Mr Terkper said.

He said it would also help ensure that a decent deficit was recorded for 2022 to avoid a looming large deficit, currently estimated at around 17 per cent of gross domestic product (GDP).

Mr Terkper said data from the Ministry of Finance and the Bank of Ghana suggested that revenue was over-stated.

“That, in itself, is not a surprise, as some of us predicted. Also, the total revenue, including expected proceeds from the E-Levy, has been stagnant, even slightly declining,” he noted.

He said revenue targets could be revised downwards to about GH¢85 billion.

Still on the need for the revisions, the former Finance Minister said the current high inflation would affect projected revenue and expenditure adversely, hence the need for a recalibration to reflect the situation.

The Chief Executive of the Association of Ghana Industries (AGI), Seth Twum-Akwaboah, said the association expected clear measures that could inject fresh hope into the economy in order to bring stability.

“We all know the challenges businesses are facing in the economy, including high inflation levels, high policy rates leading to high cost of capital, oil prices hitting the roof, as well as increasing cost of freight.

“This is destabilising the macroeconomic environment, as a result of which predictions have become difficult for industries.

Therefore, the mid-year budget review must give a clear indication for the rest of the year,” he said.