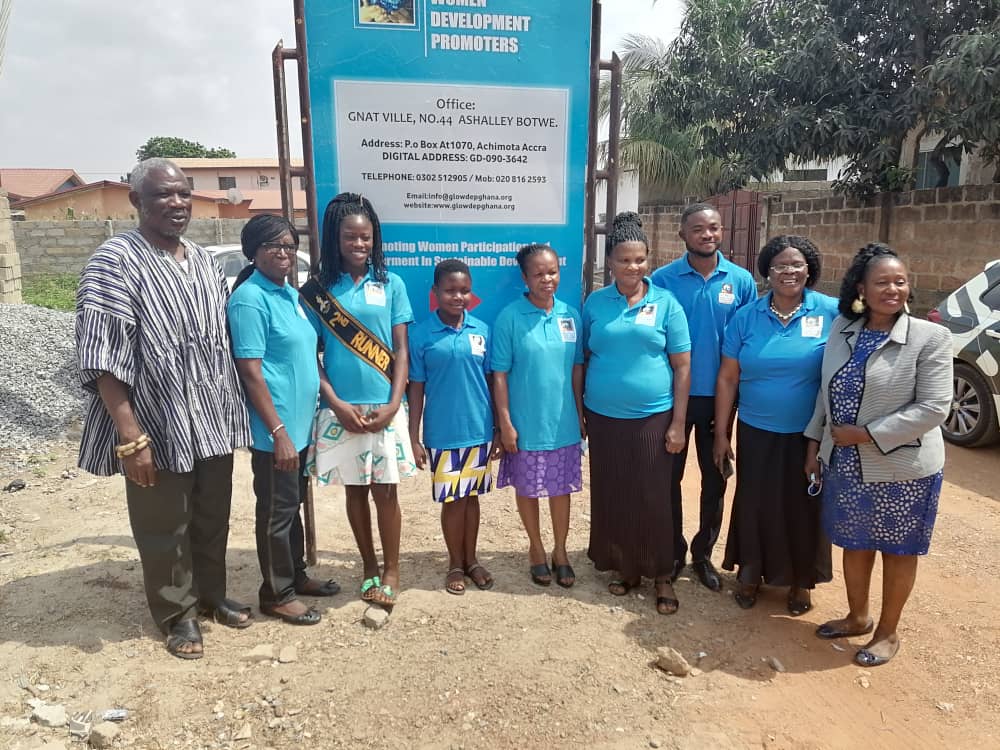 Mrs Victoria Norgbey (2nd right), the Executive Director of GLOWDEP, with some members and executives of GLOWDEP
30.5k Shares

The Global Women Development Promoters (GLOWDEP), a non-profit gender-focused organisation, has stated its commitment to advance women's empowerment through educational programmes, employable skills development and mentoring, among others.

The Executive Director of GLOWDEP, Mrs Victoria Norgbey, said the organisation combined a policy of gender equity at all levels for sustainable development while it seeks to supplement the actions of the government to focus on identifiable marginalised groups.

At a media engagement in Accra, she noted that systematic inequalities in resources, power and roles disproportionately affect women and girls that limit their opportunities and development.

“Supporting women’s and girls’ ability to fulfil their potential and make strategic life choices within the economy requires that we closely examine those systems, and identify where they face key empowerment gaps,” she said.

GLOWDEP promotes women economic empowerment through entrepreneurship savings and loans groups where 450 participants have been sensitised to and trained on group dynamics in Greater Accra and Ashanti regions.

A mentoring and coaching of young girls towards leadership culminated in the formation of 25 Girl Clubs in the Central and South Tongu districts of the Volta Region where 1000 girls have also been retrained in schools in the two districts.

Mrs Norgbey said with support from the Dutch government and RVO WaterHealth International Water, Sanitation and Hygiene project, 40 water boards had been formed and sensitised to the programme in the Ashanti, Western, Central and Greater Accra regions, and the capacity of 280 of the boards’ members, out of which 150 were women were built to sustain the water facilities.

In partnership with the Hershey Company and UNICOM, GLOWDEP implemented a one-year CocoaAction Strategy Project in 12 communities in the Central and Ashanti regions of Ghana that aimed to promote quality education, eradicate child labour by creating awareness and empowering women.

“The strategy coordinated and aligned with the cocoa sustainability efforts of the world’s largest cocoa and chocolate companies to increase their impact and contribute to building a rejuvenated and economically viable cocoa sector for over 300,000 cocoa farmers and their communities,” she said.

“Also, 1,800 women have been educated and trained on food and nutrition and another 480 fully engaged in income generating activities,” she explained.

She added the organisation's Ghana Poultry Project (GPP) was being sponsored by the United States (US) Department of Agriculture (USDA); hence, it builds the capacity of people along the poultry value chain, especially women.

GLOWDEP was established in April 2005 as an NGO with a special focus on development of girls and women and believes in gender equity at all levels for sustainable development.

The Board Chair of GLOWDEP, Mr Edwin Ahorney, said it was operating in key areas of the economy, namely agriculture, health and WASH sectors which take a larger percentage of the population.

“GLOWDEP is a network of people who believe that gender disparity is an injustice, which contributes to poverty and ignorance thereby hindering development,” he said.