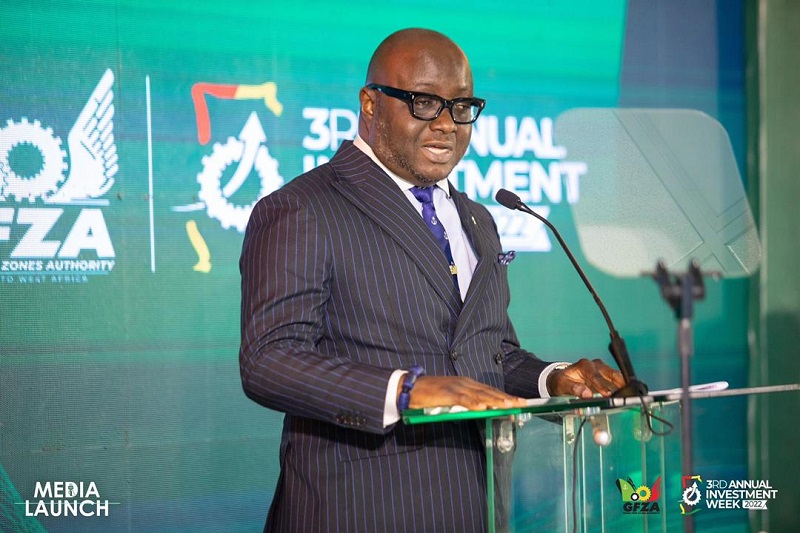 The Ghana Free Zones Authority (GFZA) has signed a memorandum of understanding (MoU) with a private developer for the development of about 1,500 acres of land located in Yabiw/Shama in the Western Region.

Designated under its Special Economic Zones, an amount of between US$250 million and US$300 million is expected to be spent to provide world-class infrastructure such as roads, electricity with a dedicated power plant, sewage treatment plant, container depot, office complex, and residential complex, among others.

The Chief Executive Officer (CEO) of GFZA, Michael Oquaye Jnr who announced this said in addition, the project, when completed, will lead to the creation of thousands of jobs and become another source of foreign exchange for the country.

He was speaking at the media launch of the 3rd Annual Investment Week 2022 in Accra.

The weeklong celebration is on the theme: "GFZA Championing Export-Led Industrial Growth in the Context of AFCFTA and World Trade."

“So far, the site has been resurveyed, and the legal process has been initiated to gazette the site as a Free Zone Industrial Park. For analysis, the authority has also collected data on some key sectors of the Ghanaian economy, such as crops and livestock production, forestry and timber, minerals, and petroleum, existing industrial developments, ports and logistics, imports and exports, the cost of doing business, and taxes.

“The data is expected to enable the developer to establish the availability of raw materials in the region and country to ensure sustainable production by companies. The signing of the main contract is imminent,” Mr Oquaye Jnr said.

This, he said, was an indication that Ghanaian companies also have the potential to take advantage of the free zone incentives and make a mark in the international market.

He said the Free Zones programme had been misconstrued as favouring mainly foreign investors.

Mr Oquaye Jnr. said on the contrary, the Programme was open to all investors, both foreign and local.

"Moreover, with the opportunities that AfCFTA also offers, we are encouraging Ghanaian-owned businesses to take advantage of the 1.3 billion African markets to expand their activities, '' he added.

He said the impact of these achievements on the economy could not be overemphasised.

He said the theme was chosen to reflect the government's focus on export-led industrialization and the AfCFTA implementation.

“We are currently grappling with a balance of trade deficit and the depreciation of our national currency; therefore, we must increase our exports to earn the needed foreign exchange to stabilise the cedi," he said.

He said an export-led industrial growth was one of the most appropriate strategies to achieve economic development; this had been the mandate of the GFZA.

Thus, the importance of the Free Zones programme in reversing the country's balance of trade deficit and the depreciating cedi was vital.

He said his outfit recognised the potential of the AfCFTA in attracting market-seeking investments and encouraging local businesses to export to the African market adding that “the AFCFTA presented Ghana with the opportunity to export to Africa, with an estimated market size of 1.3 billion people.”

He said in pursuing an export-led industrial growth strategy and the enormous opportunities AfCFTA and the world at large provide, the problems of unemployment, low export earnings, lack of value addition to our natural resources, lack of diversification of our export products, and being an insignificant player in the continental and global value chains can be solved.

He said regarding their achievements, 39 new companies have been licensed and expected to inject an estimated capital of USS230 million into the economy.

In addition, the estimated export earnings from the 39 companies are USS 529 million from an estimated production value of US$ 436 million.

He reported that the cumulative exports from the Free Zones enterprise since the programme's inception stood at USS 27 billion as of 2020.